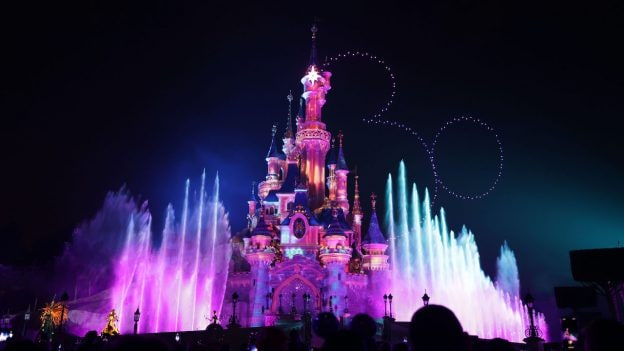 Disneyland Paris reached a new milestone yesterday, officially welcoming guests in celebration of the 30th anniversary. It’s a new era for the resort, one that is marked by transformation, limitless creativity, and the contribution of its 16,000 marvelous cast members, who are ready to bring an even more immersive and unforgettable guest experience.

To kick off the festivities, guests were greeted by a Disneyland Park decked out from head to toe in brand-new décor, including the installation “Gardens of Wonder.”

This stunning display features 30 kinetic Disney and Pixar sculptures that “come to life” right outside Sleeping Beauty Castle, which recently underwent a 12-month refurbishment in preparation for the anniversary.

As guests ventured further toward the castle, they were welcomed with the all-new “Dream…and Shine Brighter!” show that centers around three key themes: “Smile and Laugh Louder,” “Open Your Heart,” and “Believe in Your Dreams.” Featuring more than 30 dancers and Disney characters, new colorful floats, two new songs, and a mash-up of 20 Disney songs, it was also the perfect opportunity to catch Mickey and Friends in their new 30th anniversary iridescent costumes.

At Disneyland Paris, food and beverage is an extension of the experience and guests were finally able to indulge in the many offerings of the celebration from character-inspired ice cream to a stunning celebration cake and more! Plus, fan-favorite treats from international Disney resorts like the frozen Pineapple Whip, classic Mickey ice cream and turkey legs joined the lineup.

Over the course of the anniversary, more than 350 new merchandise items will debut which is the most significant product development program ever at Disneyland Paris. And the first of these exclusive items popped up in stores including three new headbands, a light up Mickey hat, and even 30th Anniversary Mickey and Minnie helium balloons. Be sure to keep an eye out as a whole new range of products and collaborations roll out in the coming months.

Minnie Mouse was thrilled to finally debut her brand-new pantsuit designed by Stella McCartney for the first time. Adding to her extensive collection as a true fashionista, Minnie Mouse will wear the new outfit from March 6 to March 31, in honor of Women’s History Month, at a meet and greet located inside Studio Theater.

As the day drew to a close, the “Disney D-light” pre-sequence premiered in addition to “Disney Illuminations,” combining video projections, illuminated water jets, lighting effects, mist, lasers, and nods to fan-favorite Disney songs. To top off the evening, a stunning display of synchronized drones formed a sparkling figure “30” above the castle.

We look forward to sharing the festivities over the coming months as Disneyland Paris brings this fabulous 30th Anniversary celebration to life.