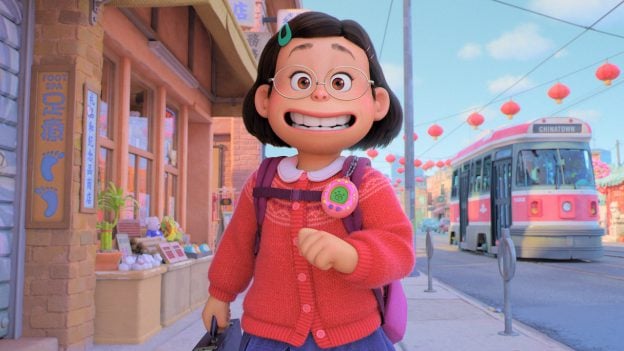 Guests visiting Disney Parks in the U.S. are in for a special treat and will soon get to experience new offerings in celebration of Disney and Pixar’s all-new coming of age comedy, “Turning Red,” streaming March 11 only on Disney+.

Guests can get an early glimpse of scenes from “Turning Red” in a sneak peek, now playing at Walt Disney World Resort in Florida. At Disney’s Hollywood Studios, the sneak peek is presented as part of the Walt Disney Presents attraction and offers you a chance to see never-before-seen clips from the film before its release.

And that’s not the only “Turning Red” treat coming to Walt Disney World Resort! Here are some delicious food and beverage offerings that await you beginning in March for a limited time.

And for all of you red panda and boy-band-loving guests visiting the Disneyland Resort in Anaheim, make sure to check out a brand-new photo-op now available near Silly Symphony Swings at Disney California Adventure park themed to “Turning Red.”

Disney and Pixar’s “Turning Red” introduces Mei Lee, a confident, dorky 13-year-old torn between staying her mother’s dutiful daughter and the chaos of adolescence. Her protective, if not slightly overbearing mother, Ming, is never far from her daughter – an unfortunate reality for a teenager. And as if changes to her interests, relationships and body weren’t enough, whenever she gets too excited (which is practically ALWAYS), she “poofs” into a giant red panda! Talk about panda-monium!

Enjoy a new clip from “Turning Red,” exclusive to Disney Parks fans, and enjoy all the ways to celebrate this new film at Walt Disney World and the Disneyland Resort!