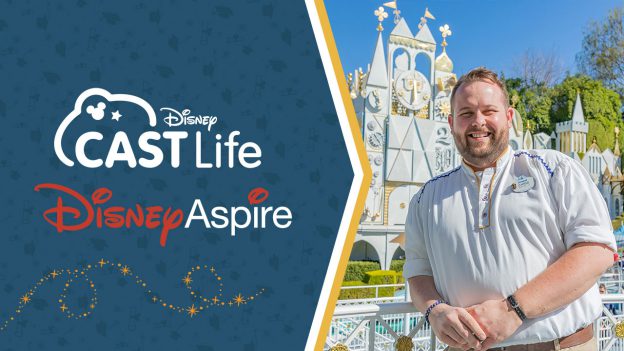 Chris Garcia-Howell, a Fantasyland attractions cast member at Disneyland park, had put his dream of pursuing higher education on hold — until he heard about the Disney Aspire program. Since the program launched in 2018, paying full tuition up front and reimbursing fees for eligible hourly cast, Chris earned a bachelor’s degree in Organizational Leadership from Brandman University (now UMass Global) in 2020, where he is currently pursuing a master’s degree in the same field of study.

“I kept saying that I would love to go back to school and get a degree,” said Chris, sharing that he made a list of pros and cons when he initially considered enrolling. “Every single thing I could try to say to talk myself out of it, Aspire had a workaround for that.”

Chris has been in attractions since joining the Disneyland Resort in 2009, currently working as a lead at “it’s a small world” and Matterhorn Bobsleds. He is working toward a stage manager role, with full support from his current leaders. “I hope to be in a role that really allows me to use what I’ve learned in school to help pay forward the time, attention and energy that’s been gifted to me, really helping to influence and shape the next generation,” he said. “I want to keep that legacy of leadership going here at the resort. That would give me fulfillment.”

Chris is proud of the hard work and personal sacrifice that has led to his accomplishments so far, but he also credits much of his success to support from his husband as well as his professors –– one of whom even suggested Chris might one day teach his course.

“It meant a lot that I was able to fulfill that goal of being able to say I had a college degree,” Chris shared. “I learned so much and can now talk to leaders about leadership styles. It helps me understand other leaders and more importantly, my own leaders even better. And I feel like I can now perform my role better.”