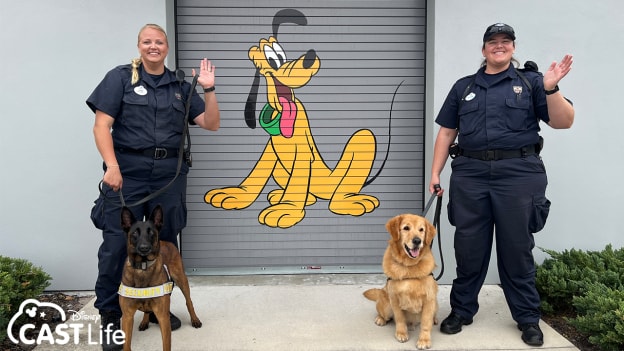 If you have visited one of the Disney parks and resorts, you may have seen security keeping our guests and cast members safe. What you also might’ve seen is another trustee companion beside them. These are our security K9 handlers and their trained K9s. Meet a few of these cast members at Walt Disney World and get to know more about the K9 program and their relationships with their dogs:

Michelle started her journey in security while getting her Animal Sciences degree at the University of Tennessee. When in school, she said she would never move back to Florida unless she got a job at Disney. As we can all see, Michelle followed her dreams and began her Disney career in security and has been with the company for five years. Upon learning about the K9 unit early in her career, it became Michelle’s goal to work her way up to eventually become a K9 handler. Fast forward to today, Michelle has been paired with Jordan, a fluffy golden retriever who loves rolling around to get a good back scratch and is a notorious food hound.

The dogs are great companions as they are cast members. Just like Michelle and other handlers, they are trained to keep our guests and cast safe while enjoying the magic at Disney. But that doesn’t mean they don’t get rewarded when they do a good job. “Our dogs work for their toys,” mentioned Michelle. “Toys are always super exciting. [Jordan] currently works for what’s called Julius ball and it’s basically a ball on a rope. He loves it because he bounces it around and is always excited when I pull it out.”

When Michelle and Jordan roam the parks at Walt Disney World, Michelle mentioned how much she loves her job, and she can see how much Jordan loves it too! One of her favorite parts about maintaining the magic in Disney security is going around and delivering stickers. “People don’t think about security doing something so simple as that and it just makes their day sometimes,” said Michelle.

One special part about working in the K9 unit – besides being able to work alongside furry friends – is that you become close pals with other cast members in the unit. Michelle and Jenn have become best friends since Jenn joined Disney three years ago and was even a bridesmaid for Jenn’s wedding. “Starting a whole new career [is difficult],” mentioned Jenn. “I was an external hire, and I didn’t know if I was going to make friends or not. [Michelle] took me under her wing and showed me how Disney security runs and that really meant a lot to me, for her to just kind of show me the ropes. We became really good friends from there.”

Coming from the U.S. Navy, Jenn was hired directly onto the K9 team and was certified to train with K9s. After seeing a woman K9 officer in elementary school, Jenn aimed her career towards working with the dogs because she saw the bond between the two and wanted the same. Now being at Disney for over three years, Jenn has been able to see how the magic of Disney meshes with the security team. “I’ve been in love with the job ever since – it’s a very rewarding job,” expressed Jenn.

Jenn couldn’t keep the smile off her face as she continued talking about her relationship with her Belgian Malinois, Chore. “There’s this unconditional bond – there’s really nothing like it. It’s the amount of trust and love you have with your K9 that makes [the relationship] special.” When paired with Chore, Jenn mentioned how the K9 unit truly finds the perfect match for each handler, and when it’s time for the K9 to retire, the handlers have the option to take their pup home with them—a one-dog one-handler program.

Although very serious in photos, Chore is a sweetheart who loves to work and be rewarded with her Kong and with treats. Jenn shared how much Chore loves to be in parks and to work alongside her. “She’s very good at what she does, and guests love her. You can tell she generally loves it.”

You could feel Jenn’s passion for her job and for Chore as she continued to talk about the K9 unit and what working for Disney meant to her. “I personally love the company and what it represents,” said Jenn. “Our role in it as well, just being able to provide protection and getting to be with my best friend every day is definitely a rewarding job for me.”

Jenn mentioned that occasionally guests will come up and thank her, Chore and other security cast members for protecting the magic. “You can tell that [guests] love us being there and we love being there for them. It means a lot to me when they take the time to recognize us, it’s very sweet.”

Interested in becoming a member of our security team at Walt Disney World? Apply today to full-time and part-time opportunities at WaltDisneyWorld.jobs.