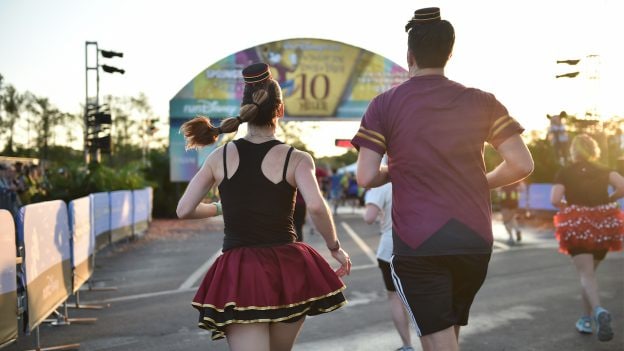 A Weekend of New Memories with a Touch of Nostalgia During the 2022 runDisney Springtime Surprise Weekend!

It was a nostalgic four-day race weekend filled with fan-favorite events and new memories made during the 2022 runDisney Springtime Surprise Weekend Celebrates Yestermorrow. Runners understood the assignment, coming out in their most thematic attire for the final Walt Disney World race weekend of the 2021-2022 runDisney race season. The inaugural event weekend featured four events including runDisney Springtime Surprise Sunrise Yoga, three endurance runs and a multi-race challenge for those who completed all the races.

Kicking off the weekend’s festivities, participants headed to Magic Kingdom Park early in the morning for the return of runDisney Sunrise Yoga. What better way to prepare for a weekend of endurance events than by finding your balance in front of Cinderella Castle?

Runners were ‘yeti’ for it during the first race of the weekend, the 2022 Expedition Everest 5K. Returning to Disney’s Animal Kingdom, runners showed off their ‘peak’ performance with a nighttime event featuring a course running through the wild theme park.

It was an appetizing second course for runners during the 2022 Race for the Taste 10K. Featuring a feast of magical early morning miles, participants found the recipe for success to finish strong on a “Ratatouille”-inspired course weaving through EPCOT and the surrounding resort area.

For the final event of the weekend, runners were transported into another dimension during The Twilight Zone Tower of Terror 10-Miler. Running amidst the glitz and the glimmer of Hollywood … and The World’s Most Magical Celebration, participants ‘bellhopped’ to it and discovered what lies beyond the fifth dimension as they received a warm welcome back to the finish line. Speaking of celebrations, two New Jersey runners took to the course and swept both the men’s and women’s divisions. Stephen Rathbun of Springfield, N.J., was the race’s overall winner, while Victoria Sadowski of Randolph, N.J., was the first woman to cross the finish line during the race that took runners through Walt Disney World Resort.

The runDisney Springtime Surprise Weekend closes out the final race weekend in the 2021-2022 race season. A big congratulations to all the weekend’s runners! Don’t miss out on more runDisney fun this summer with the recently announced summer Virtual Series celebrating “Frozen.” Save the date as general registration opens on April 5, 2022, at 10 a.m. ET. Start making plans for our next race season with other events and registration dates available here.

Did you join us for the inaugural Springtime Surprise Weekend? Be sure to share out your event photos in social using #SpringtimeSurprise. To learn more about runDisney events, visit us here.

Likes (2)
Share A Weekend of New Memories with a Touch of Nostalgia During the 2022 runDisney Springtime Surprise Weekend!