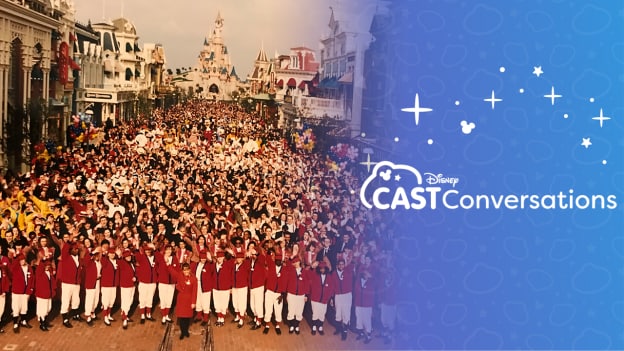 In our second episode of Cast Conversations – a series dedicated to employees and cast members at The Walt Disney Company to highlight their unique stories and faces behind the magic – we hear from three cast members who were part of the Disneyland Paris opening cast and crew over 30 years ago. Carmen and Quentin, the Disneyland Paris Ambassador duo, had the privilege to go around the ‘Zoom’ and hear some amazing stories from memorabilia to reminiscing on roles and challenges as cast prepared for opening day.

As we go back in time listening to all the Disneyland Paris stories, Camille, Steve and Scott are just a few of the many ‘pioneer’ cast members who have unique stories to tell. Stay tuned to this new series as we continue meeting magic makers all around the world, including more interviews in the next several weeks with Disneyland Paris opening day cast members to celebrate the 30th Anniversary.

How many people can say they’ve grown up with guests who’ve been visiting the parks for 25 years? Learn why Steve tells people that he has the best job in the world and how Disney has provided him with many opportunities, including opening Shanghai Disney.

Think you’ve heard it all about Disneyland Paris? Well, think again as we join Nathalie, George and Theresa as they reminisce about their life at Disneyland Paris, why being part of the opening team meant so much, and learn about certain challenges they faced back in 1992.

Did you know that Shanghai Disney Resort President and General Manager Joe Schott was a member of the opening team at Disneyland Paris? We visit with Natacha Rafalski, President of Disneyland Paris, and Joe Schott as he recounts his Disney journey to current life in Shanghai.