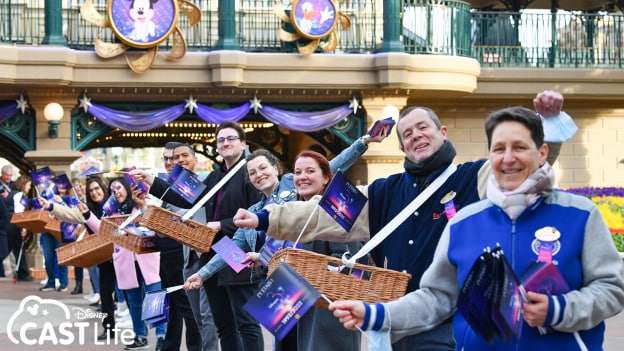 In celebration of the Disneyland Paris 30th Anniversary on April 12, cast members gathered to form a receiving line on Main Street, U.S.A., to welcome guests at the entrance of Disneyland Park.

Welcomed in the morning by President Natacha Rafalski and Daniel Delcourt, Senior Vice President, Chief Operating Office, more than 2,000 cast members took part in the celebration to form a guard of honor on Main Street, U.S.A. and handed out flags and maps of Disneyland Park which were specially printed for the occasion, showing how the park looked 30 years ago, to all guests in attendance.

In a continued effort to bring magic, happiness and hope to children who need it the most, Disney VoluntEARS spent the day with 270 underprivileged children from France and Belgium who were invited to celebrate the anniversary. “It was an extraordinary day of communion between cast members, our guests and the children we accompanied,” said Christine Bricquet, department assistant.

“The pleasure, the smiles, the sparkling eyes of all these children were multiplied by the general enthusiasm of this extraordinary day,” mentioned Christine. “For us Disney VoluntEARS, it meant double the happiness, celebrating the 30 years of Disneyland Paris and sharing it with these special guests who lived – as we did – a memorable day!” Magical and unforgettable moments were created that day as they were also able to discover all the new experiences offered as part of the resort’s 30th anniversary.

On this special day, decorations inspired by the themes of Disneyland Paris’ anniversary covered the backstage area. Over 9,200 cast members were treated to a delicious meal, and details of a contest proposed by the park’s corporate concierge service were announced, giving cast the opportunity to win stays in several European countries, such as Italy. Cast members were also surprised with a box full of gifts to thank them for their service as well as park tickets. Merchandise products from the cast member exclusive range were also available for purchase, including pins, teddy bears and T-shirts!

“A big, big thank you to the company for this nice surprise! Living this day in the park, having the good meal, followed by this beautiful gift this day will remain engraved in my memory! Thank you to the teams who work every day,” said Christoph Zbinden, learning and development coordinator.

Our cast members make magic on a daily basis for our guests and we’re thrilled that cast members in Paris were able to enjoy so many special moments throughout the day. The 30th anniversary festivities continue and more surprises await our cast members!

Be sure to follow the @DLPAmbassador Instagram page to see more 30th Anniversary celebrations and to not miss any updates.