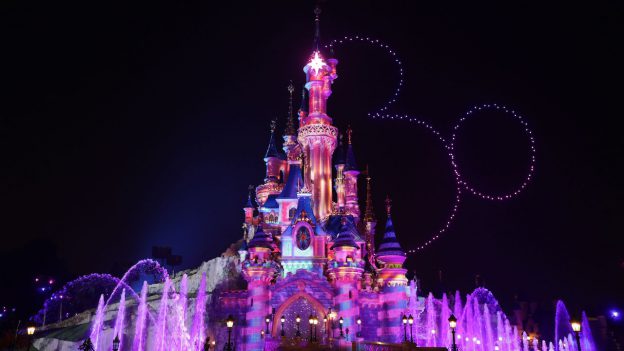 The 30th Anniversary Celebration festivities are in full swing at Disneyland Paris! While we already gave you a glimpse at some of the all-new décor, entertainment, costumes, and food and beverage tied to the anniversary, today I’m excited to give you a closer look at “Disney D-light.” This stunning display at the beginning of the guest-favorite “Disney Illuminations” show includes video projection, water jets, lighting effects, fog, lasers and—brace yourself for this—up to 150 synchronized drones that form a sparkling figure “30” above Sleeping Beauty Castle.

The team at Disneyland Paris— along with Dronisos, a technology supplier based in France and the European leader in drone shows—has been working on this impressive project (and the first for a Disney Park) in secret for over eight months. Well, the secret is finally out!

Go behind the scenes of the development of this spectacular display here:

“This is a technological feat for Disneyland Paris, for The Walt Disney Company as well, and it’s something we’ve never seen before. That’s for sure,” said Ben Spalding, the show’s producer.

“Imagine that you can take power over the stars and arrange them as you want to draw things in the sky,” added Dronisos general manager Laurent Perchais. Dronisios recruited teams of telepilots to be remote operators of the drones, operating the sequence in rotation to create this moment of pure magic every night.