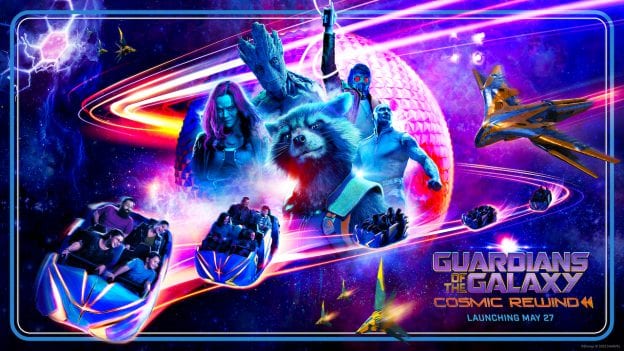 Guardians of the Galaxy: Cosmic Rewind Opens May 27 at EPCOT!

Well plant me in the ground and call me Groot, cause Guardians of the Galaxy: Cosmic Rewind is set to officially debut May 27 at EPCOT!

What do we already know about this awesome new family-thrill coaster attraction at Walt Disney World Resort? Well, we know people from the planet Xandar are coming to Earth and creating the first “other-world” showcase at EPCOT – the Wonders of Xandar pavilion. We know we’ll learn more about their technology and culture as we move through the pavilion, and discover how our two worlds are similar in so many ways.

But what actually happens? I’ve got an idea – or 12% of an idea, at least – based on the new commercial spot we’re debuting right here on the blog. Check it out below, and then let’s break it down!

OK so … what exactly did we just see?

The Guardians of the Galaxy are on their way to EPCOT, and we better be ready for an intergalactic chase through time and space. It all begins May 27 when Guardians of the Galaxy: Cosmic Rewind releases its awesome mixtape of an attraction to the world. This is another big, magical moment in the transformation of EPCOT and the Walt Disney World 50th Anniversary celebration currently underway, which we’ve been covering here on the Disney Parks Blog. Be sure to keep following along as we prep to save the galaxy with the Guardians. Until then … I am Groot.

Likes (25)
Share Guardians of the Galaxy: Cosmic Rewind Opens May 27 at EPCOT!