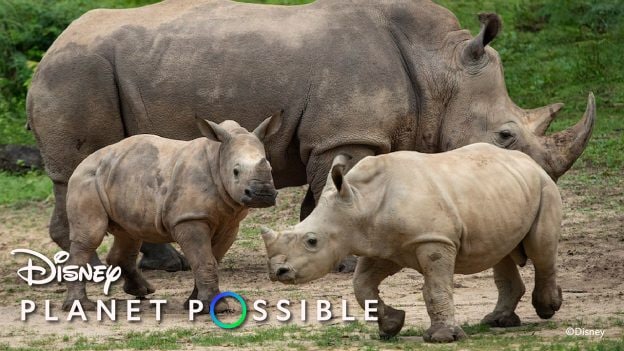 Over the past year, we have had the honor of watching three white rhino calves – Ranger, Mylo and Logan – take their first steps on the savanna on Kilimanjaro Safaris. We’ve loved sharing their stories with the world and watching how they have inspired so many to care for this near-threatened species.

This is the largest crash (or herd) of white rhinos in the history of Disney’s Animal Kingdom Theme Park, and it truly takes a village working together to accomplish this!

Disney has brought people and nature together for nearly a century through inspiring storytelling and memorable experiences. As we continue to celebrate the spirit of Disney Planet Possible and share stories that inspire action for a brighter future, I’d like to share a behind-the-scenes look at what it takes to bring three rhino calves to life through the lenses of three incredibly talented cast members and their teams within Disney’s Animals, Science and Environment. Their collaboration, expertise in their respective fields and passion for animal care helped make all of this possible.

After pursuing degrees in animal sciences and behavior, Rebecca helped open Disney’s Animal Kingdom Theme Park in 1998 as an animal keeper. She worked with primates during her first 15 years with Disney’s Animals, Science and Environment before eventually moving to lead the team that cares for the animals on the savanna on Kilimanjaro Safaris, including rhinos.

“Every rhino has an individual personality,” Rebecca said. “They are as different from each other as people are. They have complex social relationships with each other, and it is one of the most amazing things to watch a baby rhino learning how to be a rhino.”

Rebecca’s role in the births of Ranger, Mylo and Logan began long before they made their savanna debuts. Through the Association of Zoos and Aquariums Species Survival Plan, she played a crucial role in implementing the recommendations of which rhinos to pair together. This recommendation led to first-time dad Dugan being paired with Kendi, Jao and Lola, three female rhinos with very distinct genetic traits and individual personalities.

“Finding the right pairing involves a lot of thought and discussion about the best choice for that individual animal and the overall population,” Rebecca recalls. “Once the decision has been made, the teams from all participating zoos work together to ensure a safe and comfortable transition and introduction for all the rhinos involved.”

Dr. Cat is the first woman in her immediate family to go to university to study both physical and biological sciences. She comes from a long family line of male scientists who encouraged her to not only seek out STEM experiences through grade school, but also into higher education to study science.

“I feel it’s important that young girls and women have someone in their corner, advocating for them and encouraging and supporting them into a diversity of STEM fields,” she said.

Dr. Cat and her endocrinology team also played a big role in pairing the rhinos together. By monitoring hormones, they determined which females were fit for pregnancy. Once the mating pairs were selected, they continued to monitor hormones to track fertility cycles, and confirm ovulation and pregnancy. For Jao, they also worked with collaborators to introduce hormones to help normalize her often irregular or nonexistent cycles due to her age.

Jao’s pregnancy with Mylo was an incredible feat, not just for the endocrinology team but the entire white rhino population in managed care due to her genetics. Before she was a first-time mom, Jao was almost ruled out because of her irregular cycles, and was one of the oldest females in the crash.

Dr. Cat considers Mylo’s birth one of her biggest wins in her 20 years with Disney’s Animals, Science and Environment. “You’re not done until you’re done,” she says, “and you can’t just be ruled out. As the science advances, we learn there are always more things that you can try to make it a success.”

Dr. Natalie knew she wanted to work with animals from a young age. As a Chicago native, she often volunteered at her local aquarium before ultimately pursuing her Doctor of Veterinary Medicine degree from the University of Illinois.

“If you have a dream, you have to go after it,” Dr. Natalie says. “What I love most about my role is that every day is different. Each animal has different anatomy, so I’m constantly tackling new challenges.”

One of Dr. Natalie’s favorite moments at Disney’s Animals, Science and Environment was the day she realized Lola was pregnant with Logan. During a routine ultrasound, she noticed a tiny circle in the reading before confirming it was a baby rhino.

“We’ve been able to track Logan’s development since she was a mass of tiny cells,” she said. “It was the first time I’ve ever been able to do that. It was so amazing to see a one-centimeter rhino and watch it grow!”

Their teamwork doesn’t stop once a calf is born. Dr. Cat and the endocrinology team will continue to monitor all three moms’ reproductive health to make sure they remain strong and healthy. Rebecca and the rhino care team spend time looking after and training the moms and babies as they bond backstage, and eventually they coordinate each baby’s first steps on the savanna.

Each cast member recognizes the significance of these three rhino births.

For Dr. Cat, it’s continuing to grow the white rhino population and learning more about the species with each pregnancy. “Each birth gives hope,” she says. “These three rhinos allowed us to more precisely confirm conception dates, understand more about the species’ timing of maternal recognition of pregnancy, and better predict when they will give birth, all of which are a big deal for us.”

For Rebecca, it’s getting to introduce each baby rhino to the world and inspire people to help rhinos in the wild. “A nine-year-old on Kilimanjaro Safaris could see a baby rhino, fall in love and end up being the next person who helps us solve a major issue affecting the species across the world,” she says. “It just takes one connection, and you have no idea what that guest is going to do with it.”

For Dr. Natalie, it’s knowing the impact their work has on future generations. “Since ‘Magic of Disney’s Animal Kingdom’ was released on Disney+, I meet so many little girls who come to the park and are enthusiastic about becoming veterinarians,” she says. “It’s heartwarming.”

These three women represent a multitude of talented cast members leading care and conservation for rhinos of both species at Disney, and it’s truly a privilege getting to work with them every day. Welcoming Ranger, Mylo and Logan to the white rhino crash over the past year has been a beautiful journey, and it would not have been possible without the dedication of Rebecca, Dr. Cat, Dr. Natalie and their teams of animal care experts.

At Disney, we believe building a brighter, more sustainable future starts with imagining what’s possible. There’s magic in putting possibility into practice and creating a world where people, plants and animals all have a thriving place to call home. So, the next time you see these amazing young rhinos on the savanna at Disney’s Animal Kingdom Theme Park, also remember this incredible group of cast members and the many, many more behind the scenes who helped make the magic of nature possible and who work every day to help change our planet’s story.