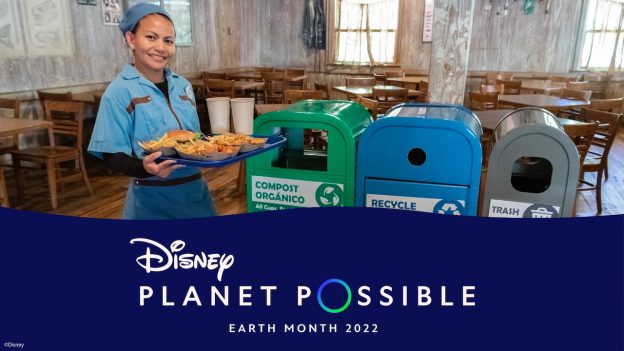 Making the Most of Disney Compost

Disney is committed to conserving our earth’s resources, and part of that commitment is to send zero waste to landfills by 2030.

Want to reduce your impact on the environment and minimize waste in your home? It’s simple … take action by composting your food scraps!

Composting is nature’s way of recycling. It’s a natural process where organic matter decomposes and is recycled into a nutrient-rich soil product often used for gardening, farming, landscaping and more. Food scraps and yard waste together currently make up more than 30% of what we throw away in the United States, and this material could be composted and given a second life instead. Composting these materials keeps them out of landfills where they take up space and release methane, a potent greenhouse gas*.

To reduce food waste and trash sent to landfills, we launched a nearly 100% compostable dining pilot last year at Restaurantosaurus at Disney’s Animal Kingdom. Almost everything you receive with your order – such as plates, cups, cutlery and, of course, food items – is compostable!

At the end of your meal, you are asked to sort waste into three separate bins for composting, recycling and trash. The compostable items are then collected and taken to an off-site commercial composting facility for processing.

Because this program is a pilot, we are testing and adjusting to make sure we get the most compostable and recyclable items and reduce contamination. Contamination happens when incorrect items are placed in the compost bin, recycling bin, or even the trash bin, and can disrupt the composting or recycling process. That’s why our top priority is to make sure it is easy for our guests to sort items correctly and join us in protecting the environment.

Disneyland Resort is also “zeroing in on zero waste” through their award-winning waste reduction efforts. Circle D Ranch, the Norco-based home of the horses of Disneyland Resort, has been deemed a zero-waste facility for several years, most recently earning its platinum certification through the U.S. Zero Waste Business Council. As part of their waste reduction efforts, the team at Circle D takes advantage of their local composting program, diverting materials like hay and manure from landfills. Their participation in the program has even inspired neighbors and nearby residents to participate in the composting program!

Over at Hong Kong Disneyland, food waste is sent to the government’s anaerobic digestion facility nearby, where it is converted into energy.  Additionally, the natural growth and regular trimming of trees plus damages during typhoon season unavoidably generates a large volume of yard waste. To avoid the landfill, Hong Kong Disneyland Resort has its own woodchippers onsite, turning these plant materials into organic mulch for on-site landscaping needs. In FY21, apart from wood chips, Hong Kong Disneyland Resort has increased yard waste recycling by expanding the sorting categories to grass clippings, leaves and shrubs, more than 540 tons of yard waste was recycled, which is 60% more than the year prior.

At Disney, we imagine what’s possible and are working to make it a reality. In addition to going zero waste, our 2030 environmental goals address emissions, water, consumer products and construction. Visit DisneyPlanetPossible.com to learn more.