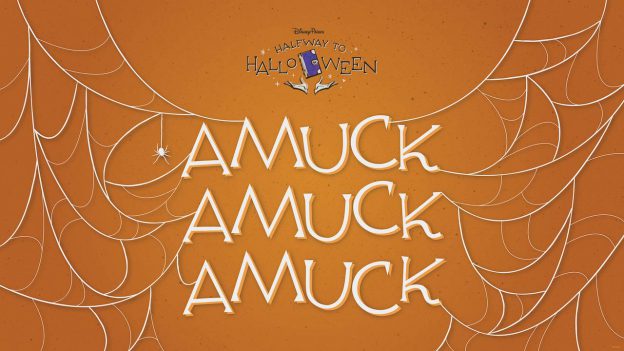 As many of you know, our biggest and best Disney #HalfwaytoHalloween celebration is now less than 24 hours away. And on the eve of all of the eerie and enchanting magic, we’re unearthing yet another early surprise with the release of a wonderfully wicked wallpaper – created especially for readers!

If you’re a fan of the Sanderson Sisters from Disney’s “Hocus Pocus” film, chances are you’ll love our new spelltacular “Amuck, Amuck, Amuck” Disney #HalfwaytoHalloween downloadable, digital wallpaper art.  This themed wallpaper, along with a spellbinding spider special touch, is perfect for all of your screens.

Click and download this new wallpaper to your desktop or mobile device now! Be sure to check out the terms of use about using all of our wallpapers before downloading.

You can also expect some mummy-approved “shriek peek” surprises, a new “Hocus Pocus” Sanderson Sisters-inspired look for all of our Disney Parks channels and much more.

As we shared earlier this week, if you really want to run “amuck, amuck, amuck” with friends and family while watching along at home, we’ll have some recipes that’ll certainly put a spell on you and your guests.  Join us later tonight!

All of tomorrow’s Halloween magic will be materializing on the front page of the Disney Parks Blog as well as on our redesigned “Everything Halloween” page, that always includes the latest fall updates at Disney Parks and other Halloween park and resort surprises.