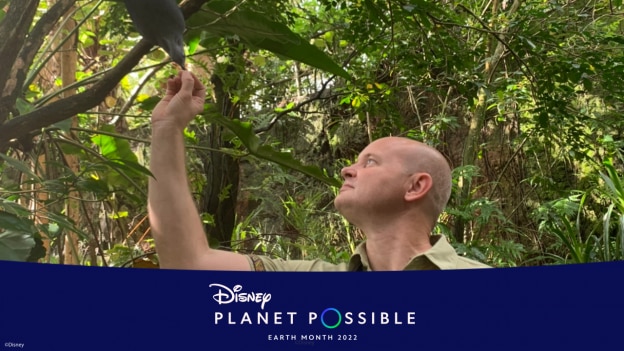 In honor of Earth Month and to celebrate Disney Planet Possible, we’re celebrating cast members’ dedication to the conservation and preservation of our planet. Their determination has helped inspire the Disney Conservation Fund to provide numerous grants supporting various conservation initiatives around the globe—taking action to change our planet’s story. One specific cast member’s passion for birds led him to both organize annual bird counts with the National Audubon Society on Walt Disney World Resort property and further the work of the Purple Martin Project, a local effort supporting migratory birds from Brazil passing through Central Florida while raising their young.

Bird Enthusiast, Conservation Leader, Disney Magic Maker: This is John Thomton, an avid “birder” since high school, who moved to Orlando 16 years ago to become an Animal Keeper at Disney’s Animal Kingdom.

Once John immersed himself in the magic of Disney’s Animal Kingdom, he saw an opportunity to make a difference for the creatures he loves most — birds. In 2010, John proposed a Disney VoluntEARS event for bird counting on Disney property. The Walt Disney World Resort Annual Bird Count celebrated its eighth anniversary this past holiday season. Approximately 60 volunteers made up of half cast members and half community members participated in the most recent count and observed over 100 native and migratory species, including locally uncommon birds such as King Rail, Field Sparrow, Roseate Spoonbill, Short-tailed Hawk, Summer Tanager and Ruby-throated Hummingbird.

“Working for Disney has become such a fun intersection of my passion and my day job. People who follow me in my personal life as a birder visit Animal Kingdom with their families, and I love being a resource for other visitors, especially birders who I didn’t know before,” John said.

Bird counts were started by the National Audubon Society (NAS) and have been running for approximately 100 years. During a bird count, volunteers survey a 115-diameter circle for birds from midnight to midnight, with the goal of identifying and counting as many birds as possible. Counts conducted at the same time of year and in the same manner show population trends of bird species over time. Once completed, count leaders submit their data to NAS, so the nonprofit can continue research on these trends, indicating what bird species might benefit most from their conservation action. The NAS can then begin projects to purchase and restore habitat, and/or advocate for them to officials, businesses and the general public, thus increase funding towards protecting them.

John alone has surveyed over 1,200 bird species, and has always hoped to use his love for birds to do something good. “Walt Disney World is one of the world’s most popular tourist destinations, so it got me thinking about starting an annual bird count. What if we did a count here at Disney and found amazing birds where everyone in the world visits? This could show the world the diversity of life right around us!” John said.

John is dedicated to continuing this work and inspiring other cast members and community members to join him in his conservation efforts. “Birds play a critical role in our ecosystem by controlling insects and serving as seed dispersers. They are highly sophisticated and really tough—from the distances they fly, the foods they catch and eat, to their mating rituals,” John said.

Next time you’re visiting Gorilla Falls Exploration Trail in Africa at Disney’s Animal Kingdom, be sure to keep an eye out for John in the aviary and ask him about the birds you see. And don’t forget to join us to picture what’s possible this Earth Month by sharing images of what gives you hope for the future of the planet with #DisneyPlanetPossible.