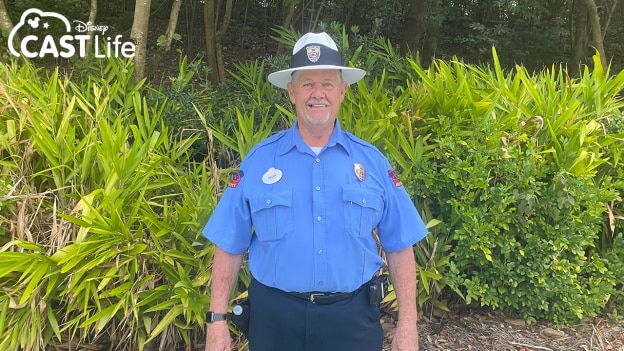 Meet U.S. Air Force Veteran, Ralph Eagen. Keeping others safe has been a key part of Ralph’s career that spans more than five decades. Today, he works on the Walt Disney World Security team at Disney’s Animal Kingdom Theme Park, but he’s been protecting the magic in various ways throughout the resort since the mid ‘90s.

After serving in the U.S. military for more than 20 years, Ralph retired from the U.S. Air Force when he and his wife made the decision to relocate to Orlando, Florida from Montgomery, Alabama. In 1995, Walt Disney World was about to make a big splash with the opening of Disney’s Blizzard Beach Water Park. “After retiring from the military, I wanted to find a role where I could be outdoors, and I joined the team as a lifeguard and helped open the park,” shares Ralph.

While spending several years as a lifeguard ensuring the well-being of guests who visited Disney’s Blizzard Beach Water Park, Ralph and his daughter even made an underwater appearance in snorkeling gear in an early promotional pamphlet. Later, he assumed another important role that involved the safety of guests on the water when he transferred to Fort Wilderness Marina as a lake patrol. After leaving Disney for a period of time, Ralph recently returned last year as cast member on the security team where he is once again keeping guests safe. This time it’s not in the water, but on dry land welcoming guests to Disney’s Animal Kingdom Theme Park.

Ralph shares that there are many similarities between his previous roles more than two decades ago as a lifeguard and lake patrol, and his new responsibilities on the security team. Each role is critical to ensuring consistent safety and security while delivering a great guest experience. “Everybody’s Disney experience should be the best they’ve ever had. My job is to make their time going through security swift and easy. I love interacting with our guests and meeting people from around the world.”

The world may have changed in many ways since opening day at Blizzard Beach in 1995, but what remains the same is Ralph’s dedication and commitment to protecting the magic. “Simply put – this is by far the best role I’ve ever had. This is not a job; this is a joy.”