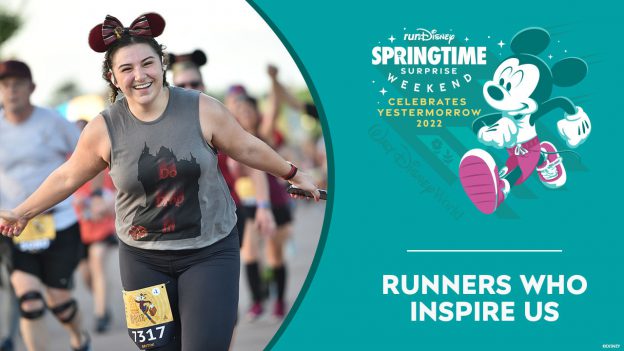 runDisney races are far from ordinary. From exciting courses through Walt Disney World Resort to Disney Characters, live entertainment and commemorative Disney finisher’s medals, every mile is magic. At the heart of that magic are our runners, each with amazing stories of accomplishment. As Autism Acceptance month comes to an end, we’re excited to share the story of one incredible runner, who was diagnosed with autism at a young age, and her amazing finish at the 2022 runDisney Springtime Surprise Weekend.

Hailing from Niagara Falls, New York, Britini D’Angelo was just 22-months old when she was diagnosed with autism. It wasn’t an easy journey, as Britini was non-verbal through the age of three and had to undergo hours of applied behavioral analysis as a child. “There have been so many obstacles I’ve had to overcome,” she said. “When you’re diagnosed with a neurological disorder [like] autism, there are so many stigmas attached to it. You’re constantly fighting against those stigmas.” Despite all the challenges, Britini went on to graduate from Niagara University with her Master’s in Early Childhood and Childhood Education and now teaches Kindergarten.

In her youth, Britini also found success in athletics, playing tennis in college, and earning her 4th degree black belt in martial arts. But it wasn’t until after college that she discovered distance running. “Change is something I’m still working on, but … running was one thing in every town that I could keep the same. I could always find a gym and treadmill, so for me that’s how I started loving running.” As a lifelong fan of Walt Disney World Resort, she soon found her way to runDisney. As a child living with autism, Walt Disney World Resort had been the place she and her family could go with no worries, and that sentiment lives on at runDisney events. “I get to be just Britini. I get to run with so many other people who are going through the same things that I am.”

April is also Autism Acceptance Month in the United States, so with the runDisney Springtime Surprise Weekend in April, it was the perfect opportunity for Britini to take on her longest distance yet: the Twilight Zone Tower of Terror 10-Miler. “It took a lot of hard work and determination. I only know how to give 150% to everything I do,” she said, “because if I don’t, it’s not going to work the same.” Britini’s determination paid off, as she finished the race with a smile. “If you want to come run runDisney, and you’re diagnosed with autism and share the same superpower as me, you can do it too!”