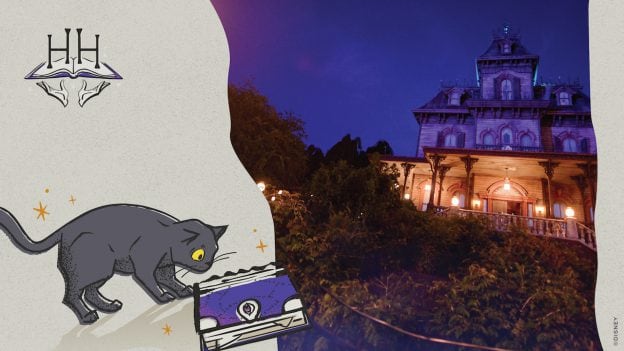 Today’s story is somewhat unique and calls for a different kind of introduction as we explore the ghoulish delights of Halloween year-round at Disney Parks around the world. From wall-to-wall creeps to a tower seemingly frozen in time, we invite you, if you dare, to step aboard.

Our tour begins in Tokyo, where this year the happy haunts are materializing once again from Sept. 15 – Oct. 31 for a special “Disney Halloween” event at both Tokyo Disneyland and Tokyo DisneySea. To prepare for this swinging wake, Haunted Mansion and Tower of Terror are in still in operation, waiting for you.

Recently restored by the New York City Preservation Society, tours of the Hotel Hightower are now open to the public …with an elevator still in operation … waiting for you! Brave souls are invited to travel to the top floor and discover why it’s garnered the name Tower of Terror after the mysterious disappearance of its owner Harrison Hightower III in 1899.

The 999 happy haunts are dying to meet those willing to walk through the mansion’s gates — making it an even 1,000. Step into your “doom buggy” and discover the secrets of this ominous home, sitting within Fantasyland at Tokyo Disneyland … there’s no turning back now!

We’re now traveling directly to Paris where you may recognize The Twilight Zone: Tower of Terror. At Walt Disney Studios Park, you’re invited to face three hair-raising new horrors: The Malevolent Machine, The Shaft Creatures, and The 5th Dimension. A unique experience beyond the deepest, darkest corners of the imagination, the real chills arrive as the elevator plummets into an unpredictable journey transporting you to one of three different storylines and drop profiles dependent upon the elevator shaft boarded.

Tucked into the corner of Frontierland, the residents of Phantom Manor are waiting to greet unsuspecting guests. Rumor has it this haunted mansion is owned by Henry Ravenswood, who doesn’t approve of his daughter Melanie’s four suitors, each of whom came to a mysterious and untimely end. The bride-to-be has been waiting many long years for her wedding day, haunting the halls of this once grand home.

Batten down the hatches me hearties, as we sail over to Pirates of the Caribbean Battle for the Sunken Treasure at Shanghai Disney Resort. The treasure hunt begins upon leaving the dock into murky waters where it be too late to alter course. This grand take on a classic is a seamless blend of Disney storytelling and jaw-dropping technology, as Captain Jack Sparrow attempts to steal a priceless treasure from Davy Jones. A mysterious journey awaits for those seekin’ adventure and salty old pirates, but as we know, dead men tell no tales.

Prepare to confront a terrifying secret and unravel the mystery of Roaring Rapids! Home to a crocodile-like beast, those seeking adventure are invited to board a raft and head upriver into the treacherous waters. Speeding through darkness and deafening rapids, brave volunteers may just find themselves thrust into the enraged monster itself.

A warm welcome back to those of you who made it from our journey around the world. Be sure to hurry back to the Disney Parks Blog as we celebrate #HalfwayToHalloween and share more spine-chilling fun.