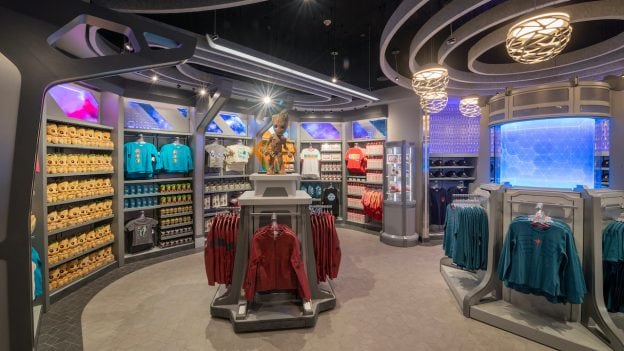 Awesome New ‘Guardians of the Galaxy’-Themed Merchandise Coming to EPCOT

With the official launch of the Guardians of the Galaxy: Cosmic Rewind attraction taking place tomorrow, it is almost time for Disney Parks fans and intergalactic outlaws alike to gear up!

The grand opening of this new family-thrill coaster attraction at EPCOT also heralds the debut of the Treasures of Xandar merchandise location, which will be dedicated to all things Guardians. Treasures of Xandar will unveil several new product lines honoring the Guardians and their many intergalactic adventures. Items from the “Guardians of the Galaxy” collections, including a limited release of opening-day merchandise, will be available at Creations Shop beginning May 27.

Guardians of the Galaxy: Heroes of Xandar Collection

What if the Guardians were actually rock stars? What kind of music would their hypothetical band play? And more importantly, would they perform live at any event venues on Earth? (Because I would definitely buy a ticket!) Inspired by the vintage concert merchandise of the 1980s, the Guardians of the Galaxy: Heroes of Xandar Collection imagines the gear and memorabilia fans would collect during the Guardians’ fictional intergalactic tour.

Guardians of the Galaxy: Through the Eyes of Quill Collection

Before he became known across the galaxies as Star-Lord, Peter Quill was an average American kid growing up in the 1980s. Peter even visited EPCOT as a child, snapping a photo in front of Spaceship Earth. The Guardians of the Galaxy: Through the Eyes of Quill Collection is reminiscent of Peter’s younger years on Earth and his first trip to Walt Disney World, featuring the retro graphics and bold colors that were popular in the 1980s.

Groot Through the Years Collection

Fans of the Guardians of the Galaxy movie franchise will remember the many life stages of Groot. The new Groot Through the Years Collection illustrates the sentient tree-like creature’s evolution from baby to adolescent to adult through a range of toys, home décor and children’s apparel. Say it with me: “I am Groot!”

Keep checking back with us here on the Disney Parks Blog for the latest Guardians of the Galaxy: Cosmic Rewind news as the EPCOT transformation continues!