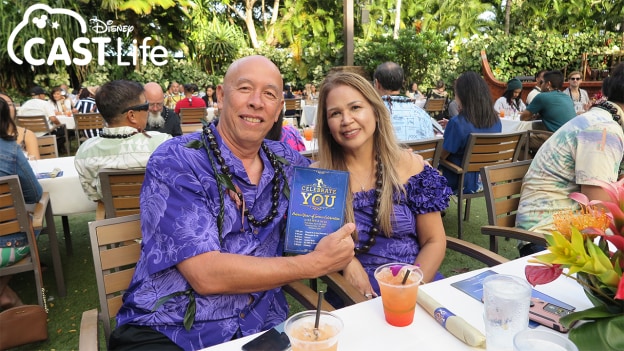 Celebrating 361 Members of our Disney ‘Ohana

Three hundred sixty-one cast members at Aulani, A Disney Resort & Spa were honored for an incredibly special milestone – their 10-year (or more) service anniversary! This special gathering was dedicated to our Aulani ‘ohana who celebrated anywhere from 10 years to 40 years with the company in 2020 and 2021. Several hundred cast members have been with Aulani Resort since it opened in 2011. Even Mickey Mouse and Minnie Mouse, in Hawaii on vacation, stopped by to congratulate the honorees.

Cast members and a guest were invited to a special performance of Aulani Resort’s popular KA WA’A lū’au, an enchanting, colorful, oftentimes moving chronicle of how the ‘Ewa plain (where Aulani Resort is located) was first discovered by Hawaiians. It was an evening of good food, camaraderie and gratitude from Aulani Resort’s leadership for bringing magic to guests, Disney Vacation Club Members, the community and fellow cast for a decade or more!

“We can’t thank our cast enough,” said Aulani, A Disney Resort & Spa general manager Kimberly Agas. “They are the ones who make the resort what it is, who help create smiles and lifelong memories for our guests and DVC Members, who add the magic you can only find at Aulani Resort. We wanted to do something extra special for them to mark this achievement, because they certainly deserve it.”

Several of the cast members who were honored expressed amazement at how time has flown, and how the 10-year milestone has made them reflect on their years at Aulani Resort and with The Walt Disney Company.

“There are a lot of memories, a lot of fun times,” said Kendall Bercaw, an assistant store manager who was celebrating her 15-year service anniversary in 2021. “I love working with the other cast members – they really have made this a great experience!”

Aulani Resort engineering director Robert Belair, who has been with Disney for 40 years, said “It’s overwhelming to look back – everything has gone by so fast. But it’s been a great journey.”

Senior catering & convention services manager Jayson Buccat also celebrated 15 years with Disney in 2021.  “I appreciate being able to impact peoples’ lives, working with a great team,” Jayson said. “I think that’s the best part, being able to have that positive impact on our guests.”

We thank you and honor you, our celebrating cast members. Here’s to many more years of creating magic and happiness!

For more #DisneyCastLife stories, check here on the Cast Life Blog every day and follow the Disney Ambassador teams on Instagram.