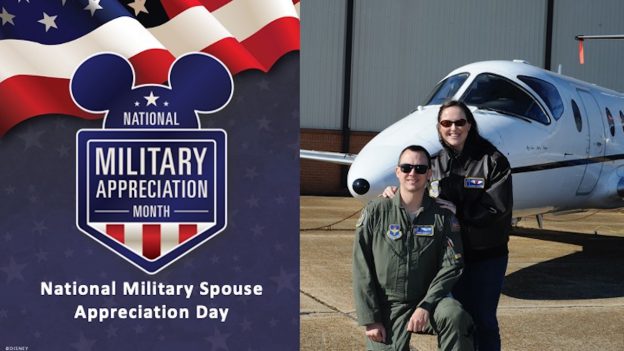 Honoring military service members and their families has been part of Disney’s rich history for nearly 100 years. In recognition of Military Spouse Appreciation Day, we’re thrilled to shine a spotlight on our cast member Lindsey Morris, a Disney Campus Recruiter focusing on Disney Professional Interns, and the proud military spouse of a reserve U.S. Air Force pilot.

Military Spouse Appreciation Day is celebrated annually on the Friday before Mother’s Day to acknowledge the significant contributions, support, and sacrifices of spouses of the armed forces.

Lindsey’s husband is a pilot in the U.S. Air Force Reserves, having an active career from 2005 to 2018. While on active duty, his military service required frequent moves to bases across the U.S. including South Carolina, Mississippi, Florida, and Delaware and more, which made it hard for Lindsey to have a career. Lindsey had been part of Disney since 1998 working in various roles but that changed in 2008 when she began a remote career with The Walt Disney Company while her husband had just graduated from pilot training stationed at Charleston Air Force Base in South Carolina.

“Long before telecommuting was an option, Disney offered remote positions,” Lindsey said. “This allowed me to have a career, while also supporting my husband’s military career and moving with my family without having to stress about finding a new opportunity for work each time. Having the support of Disney has given me an amazing career for over a decade. I really appreciate the support the company provides to military families like mine.”

Lindsey and her family enjoying a vacation aboard the Disney Dream

Join us in thanking Lindsey and her family for their service and continue to follow along as we share stories from our amazing cast members who have strong connections to the armed forces throughout National Military Appreciation Month.