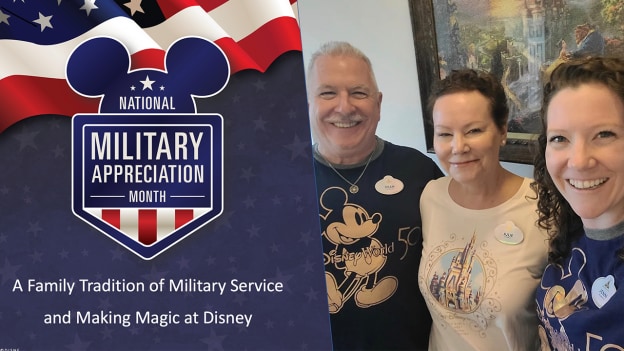 Disney SALUTE: A Family Tradition of Military Service and Making Magic at Disney

Here at Disney, we love celebrating the contributions our military veteran cast members make every day and sharing their amazing stories. It is even more special when the story involves more than one cast member.

Today, we recognize Jenn O’Rourke, project manager for Supply Chain Transformation at Walt Disney World Resort who serves in uniform in the U.S. Air Force reservist as an Intelligence Officer supporting the 920th Rescue Wing at Patrick Space Force Base. She shared that growing up in a military family instilled within her a sense of service to her country. Her father, Dean served in the U.S. Navy and her mom, Julie grew up in a military family with her father and siblings serving in the U.S. Air Force. She also said how much visiting Disney parks with her family meant to them in between extended separations as a result of military deployments.

“Serving the nation is very special to me,” said Jenn. “As a child, watching my family serve, I understood the sacrifice. I was so proud to continue the family legacy of service to the nation, and I know it made my parents proud as well.”

But being in the service isn’t the only thing this family has in common, all three of them now work at the Walt Disney World Resort here in Florida!

After a 22-year career as a Navy Master Chief, Dean asked his wife where she would like to move to once he hung up his Navy uniform. Without missing a beat, Julie said “Disney! Of course.” This led to the family relocating down to Florida from Virginia where Dean was stationed to begin a new Disney career. Julie also began her journey as a seasonal cast member and is currently a part time cast member.

Jenn shared that the fact that all three of them now work at Disney together is a happy coincidence!

“As a kid, we would drive down as a family to Orlando from Virginia during our vacations to visit the resort,” said Jenn. “My love for Disney runs in the family, and for all three of us to be here working together, is just the icing on the cake!”

Jenn and Dean are two of thousands of military veterans who joined The Walt Disney Company as part of our Heroes Work Here program. We salute them and all those who currently serve in the Armed Forces at duty stations around the world.