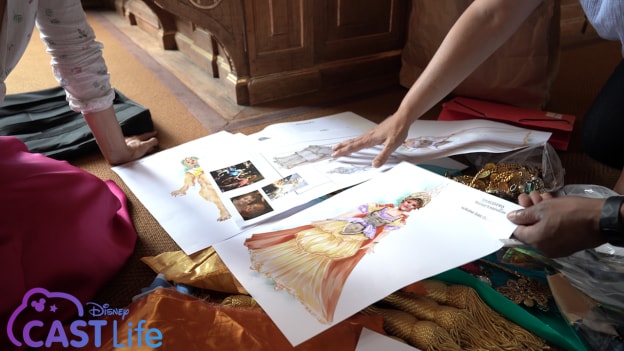 It comes as no surprise that the Château de Fontainebleau, home to 34 kings and two emperors, recently approached Disneyland Paris to create two exclusive pieces – Alexander the Great and Thalestris, queen of the Amazons – for their L’Art de la Fête à la Cour des Valois exhibition, going on now through July 4. The exhibition brings to life the lavish festivities that were held at the court of the Valois, from the reign of Francis I to that of Henry III.

Using 16th century sketches by Primaticcio, the Italian master of the Bellefontaine Renaissance, Disneyland Paris cast members set to work bringing these costumes to life. Four modified and styled wigs, twenty meters of fabric, thirty meters of gold braid with embossed and molded leather were used to recreate the richness and brilliance of these costumes. A total of 1,000 hours of work were clocked by the dozen cast members chosen to create these iconic costumes, including costume designers, illustration designers, make-up designers, a wig maker, model makers and prop makers. Through their creativity and expertise, these two pieces famously worn in the French Court were brilliantly reimagined.

The cast members who were a part of this project shared that they found this experience to be enriching and exciting as they truly had to go back in time – immersing themselves into the world of the 16th century to research and understand the customs of the time to create these costumes.

We love seeing the talents and dedication of our cast put on display, not only at Disneyland Paris, but also around France!