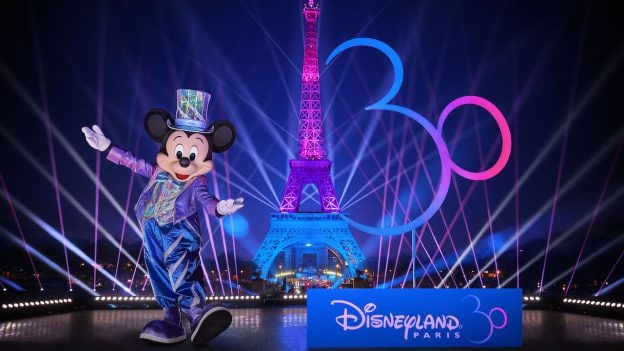 That’s right —the Eiffel Tower was bathed in the iridescent colors of Disneyland Paris’ 30th Anniversary, a feat orchestrated by Mickey Mouse himself. As the Iconic French Monument sparkled, a unique sound and light show made just for the occasion accompanied the dazzling scene.

A group of 30 guests witnessed this one-of-a-kind event, all of whom had a special connection to Disneyland Paris. The group featured a mix of cast members who have been working at the resort since opening day, or who were VoluntEARS of the year, as well as dedicated fans and loyal guests.

But that’s not all they got to experience! Earlier that night, the guests started their journey at Disneyland Paris – enjoying a fine meal at Walt’s – an American restaurant before watching “Disney D-Light,” a magical show launched for the 30th Anniversary celebration that uses drone technology, and the nighttime spectacular, “Disney Illuminations.”

If the night stopped there, it would’ve been memorable as is. But the fun only continued! After boarding a bus to a secret location, the guests found themselves in front of the Eiffel Tower! They were surprised to find Minnie Mouse, who was there to greet each guest. Mickey then appeared as the Master of Ceremony for this spectacular show that lit up the Trocadéro gardens located in front of the monument. The show’s finale was breathtaking as the Eiffel Tower shone in the magical colors of the 30th Anniversary. Quelle surprise!

A one-of-a-kind event such as this couldn’t have been made possible without the strong relationship between Disneyland Paris, the city of Paris, and France together. What are your thoughts on this spectacular event? Let us know in the comments below!