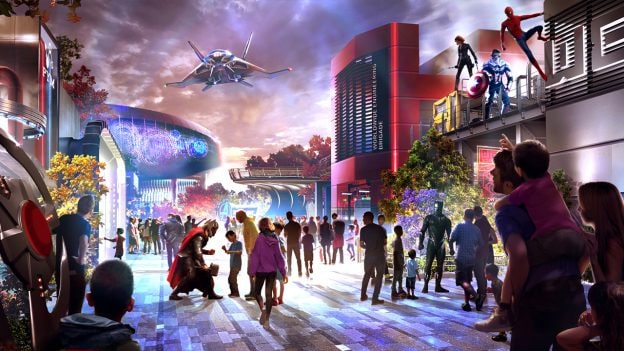 Beginning on July 20, 2022, Earth’s Mightiest Heroes are gathering at Avengers Campus Paris. Here, recruits are invited to encounter some of their favorite Super Heroes –  training with Okoye and the Dora Milaje, watching Black Widow fight evil forces, dancing with the Guardians of the Galaxy, and so much more!

It’s time to swing into the action and meet Spider-Man, Iron Man or Captain Marvel in the all-new Training Center. Unleash your inner hero for the first time at any Disney Park with a dynamic “freeze frame” video sequence, created by Disney PhotoPass.

In true action-packed fashion, 27 cameras will capture these meetings, turning your heroic encounters into unforgettable moments by booking through the Disneyland Paris mobile app.

Train with the Warriors of Wakanda: The Dora Milaje

At Avengers Campus, recruits of all ages are able to encounter heroes in more interactive and exciting ways than ever before, including the chance to train with Black Panther’s loyal protectors, the Dora Milaje. Recruits are invited to learn from the warriors of Wakanda and discover what it’s like to be a member of this elite royal guard.

Saving the universe can be fun too! It’s time to show off your out-of-this-world dance moves during an interactive dance-off with Star-Lord and Gamora from the Guardians of the Galaxy. Plus, the Gateway Portal will also give recruits the chance to capture the moment when they meet one of the many Super Heroes of Avengers Campus.

And, exclusive to Disneyland Paris, “F.R.I.D.A.Y.” the famous Artificial Intelligence designed by Tony Stark himself will be watching and interacting with super heroes and recruits alike. Uploaded to the building façade of AVENGERS ASSEMBLE: FLIGHT FORCE building – the Avengers Headquarters – she will welcome recruits to the Campus, monitor for threats, and signal the arrivals and departures of Avengers.

Now that it’s almost time for your favorite heroes to assemble, who are you most excited to encounter? Stay tuned as we continue to suit up to share the exciting news coming out of Avengers Campus Paris.