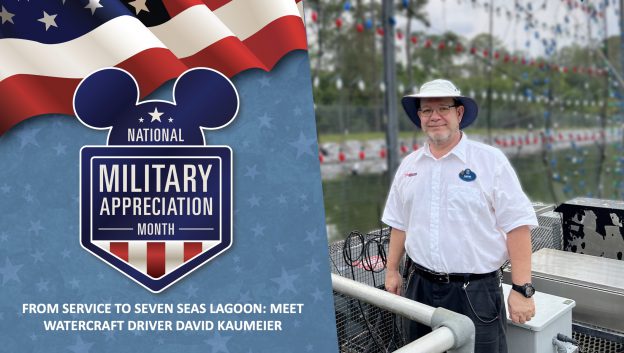 Picture this: it’s a warm evening on Seven Seas Lagoon at Walt Disney World Resort. You’re waiting to watch “Disney Enchantment” from one of the resort hotels overlooking the water, when suddenly two strings of black barges appear on the horizon. Cheers erupt as music begins to play—first playful, and then patriotic—and the barges come to life with glowing lights and dancing animations. This isn’t a nighttime spectacular, but you know it’s something different… something uniquely Disney. It’s the Electrical Water Pageant, the very show that has entertained cast and guests alike for 50 years, and suddenly you are watching a part of Walt Disney World history!

So, what made the Electrical Water Pageant last the test of time? A lot of lights (37,000 to be exact!), a little pixie dust, and a small team of watercraft cast members like retired United States Navy veteran David Kaumeier. David has been working on the Electrical Water Pageant for over 40 years, ensuring that each show barge is lit to perfection before driving them out to entertain all of Seven Seas Lagoon.

But, for 16 of his 40 years, David dedicated time away from work to serve as a Boatswain’s Mate in the Navy where he operated all over the world. His experience as a watercraft cast member set him up for success in the military, and he continues to honor his country each night he drives the Electrical Water Pageant for cast and guests alike.

Take a look at David’s story below, and make sure to stay tuned to the Disney Cast Life Blog for more this Military Appreciation Month.