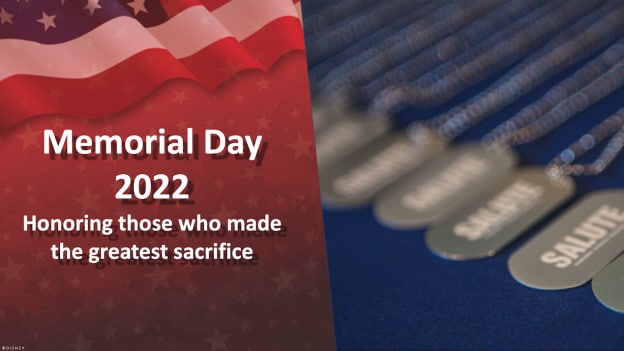 Memorial Day is a day to pause and remember those in military uniform who made the ultimate sacrifice in defense of our freedoms. One hero we remember this Memorial Day weekend is U.S. Marine Sgt. Jonathon C. Haggin who was killed in action on July 30, 2005 while serving during Operation Iraqi Freedom. He was the son of Disneyland cast member, Jocelyn Haggin, who shared her son’s story so his service, valor and sacrifice will never be forgotten.

Jonathon first enlisted in the U.S. Marine Corps where he served at Camp Pendleton and did two tours of duty in Iraq as part of Operation Iraqi Freedom. Following his second tour, he returned home to Georgia to pursue a career outside of the service. It wasn’t long before he felt the call to duty again. This time, he enlisted in the Georgia National Guard, where he was once again deployed to Iraq. During this tour, many of those in his unit were injured by an Improvised Explosive Device (IED). Despite being wounded himself, Jonathon saved the life of one of his fellow Soldiers that day. He was then medically evacuated to Germany to recover.

Jocelyn shared that her son’s commitment to those he served alongside ran deep and he quickly volunteered to return to Iraq. Soon after Jonathon rejoined his unit, another IED took his life.

He left behind his wife and two children, as well as his parents and siblings. Jonathon was awarded two Purple Heart Medals posthumously and laid to rest at Riverside National Cemetery in Riverside, California.

“My son was honored to serve in the Georgia National Guard but he was always a Marine through and through,” said Jocelyn. She shared that both the Marine Corps and Georgia National Guard sent many representatives to Jonathon’s funeral, to recognize his service in both branches of the military and to honor his family.

“I am incredibly proud of my son and all that he accomplished,” said Jocelyn. “Memorial Day is hard for our family, but we will always remember him as our hero.”

On Memorial Day we remember all our fallen heroes with Missing Hero tables at Disneyland Resort hotels and select backstage locations at Walt Disney World Resort. The table is a military tradition and pays respects to fallen or missing service members. There are several notable features of the table and its content. Here are just a few:

We are also honored to host the U.S. Air Force’s “Airmen of Note” band who will be performing on the Waterside Stage at Disney Springs at Walt Disney World Resort on May 29 and 30 in recognition of Memorial Day. Performances will be at 7:30 p.m., 8:30 p.m. and 9:30 p.m. each day. To learn more about the “Airmen of Note,” please visit: https://www.music.af.mil/USAFBand/Ensembles/Airmen-of-Note/

We hope you join us in taking a moment this holiday weekend to remember and honor all the brave service members who have made the greatest sacrifice while serving their country.