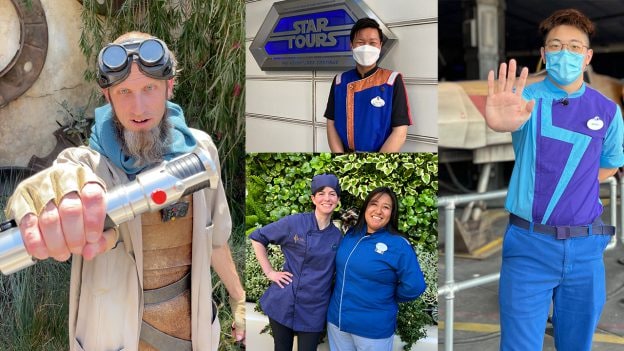 How Disney Cast Bring the Star Wars Galaxy to Life!

While May the 4th only comes around once a year, Disney cast members bring the Star Wars galaxy to life every day. Whether you are discovering the planet of Batuu, jumping to Lightspeed on Star Tours: The Adventures Continues or traveling onboard Star Wars: Galactic Starcruiser, it takes dedicated cast to make those experiences happen. With such a rich cinematic and pop culture history, being a part of Star Wars is far more than a role for many of our cast, it’s a passion and a calling. After all, where else can you travel to a galaxy far, far away each day?

Kenny works at Hyperspace Mountain in Tomorrowland. He is a huge Star Wars fan! Working here for six years, he enjoys bringing Star Wars magic to our guests every day. His favorite quote is “May the force be with you,” and he reminds guests of this famous advice before they board their vehicle, wishing each guest luck to complete their Star Wars mission successfully!

His first Star Wars memory was of Jedi Training: Trials of the Temple at Hong Kong Disneyland. He’s always amazed by the talent of the Jedi Master mastering the Force together with the trainees to fight the dark side. Kenny’s personal “never give up” spirit is something that he learned from that story.

You can see Margaux’s passion for her work in her eyes. They sparkle when asked what she loves the most about working at Star Tours: The Adventures Continue:

“The interactions we have with our guests: we can live extraordinarily unique moments with them, they tell us Star Wars is so important to them, or maybe they didn’t know a thing about it, and yet they leave the attraction amazed. [Those moments] are most important, and that’s what we are here for!”

Margaux didn’t grow up with the Star Wars galaxy, but her best friend introduced her to it, which is why it’s become a symbol of friendship to her. As a youngling, Margaux dreamed of being a singer or actor, and today, that dream soars in a new way.

“One of the advantages of working at Star Tours is that I get to [act in this story] every day, as I play a very important role! I do my best to immerse our guests in Star Wars stories and help them enjoy the best experience!”

Kunio has 11 years of experience as a cast member. He shared an unforgettable, precious memory with a guest, a small boy who loved Star Wars. The boy was uncomfortable with dark places and wasn’t able to board StarSpeeder 1000. He repeatedly got in line, but changed his mind when it came time to ride the attraction. Kunio says he enjoyed having a great conversation with the boy as he waited in line. The boy wasn’t able to embark on a journey into space that day, but he enjoyed his adventure with Kunio on Earth, and he sent a letter to say “Thank you Takami-san.”

There is no doubt that travelers boarding the Halcyon starcruiser are in for an adventure unlike any other with top-tier service that is made possible by Chandrila Star Line’s incredible crew members – like Misha and Ashley. The two joined the crew from their home planets of Yavin 4 and Felucia, eager for adventure. What they discovered was so much more than adventure – they found a sense of belonging among the crew, who work together, as one.

“Everyone is always wanting to help each other, which is very special,” said Misha, a Pastry Cook, who serves up delicious galactic dishes from the far corners of the galaxy.

Ashley agreed and shared her favorite part about working aboard the Halcyon starcruiser is her fellow Passenger Services crew members.

“I’ve never worked with another team like this before,” Ashley said. “To see everyone really become family here aboard the Halcyon starcruiser has been absolutely amazing.”

Ben works at Savi’s Workshop in Star Wars: Galaxy’s Edge. He’s worked for Savi’s since he was a “youngling” growing up around all the scrap metal collected by the Gatherers before becoming one himself. He loves giving “off worlders” the chance to experience building a lightsaber of their own.

One of Ben’s favorite memories was the time he helped a very young child build his own lightsaber. The child chose the parts all on his own, and, with a little parental assistance, he assembled it with Ben’s wisdom and guidance. The family was beyond moved by the completion of a lightsaber made with such teamwork. Ben was able to soak in that specific moment and cherish his ability to be a part of ongoing moments that many dream of having.

For more #DisneyCastLife stories, be sure to follow the Disney Ambassador teams on Instagram. And May the 4th be with you…