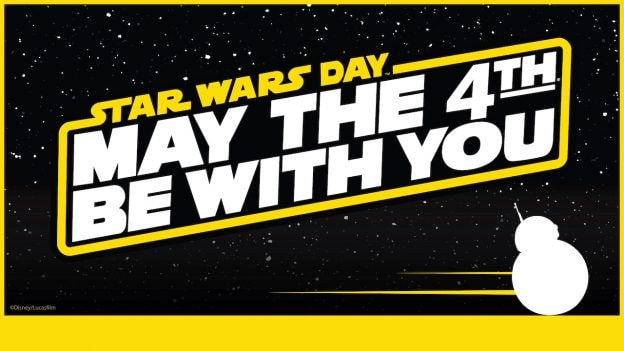 Join the May the 4th Festivities at Disney Parks

Dust off your lightsabers and charge your favorite droid because #MayThe4thBeWithYou is here! May the 4th (a.k.a. Star Wars Day) is an annual celebration for fans around the world to unite and share their love of all things Star Wars. From delicious galactic goodies to new interactive experiences, here’s a list of the many ways you can call upon the Force and make this a memorable May the 4th.

Special Episode of the planDisney Podcast

planDisney Podcast dropped their first special episode today, just in time for May the 4th! On this new episode, the planDisney panelists chat all about Star Wars at Disney Parks, from tips for your next trip to Batuu to advice on what to look forward to on a voyage aboard the Halcyon starcruiser. Plus, you don’t want to miss the chat with Scott Trowbridge, Portfolio Creative Executive from Walt Disney Imagineering, on what it takes to bring Star Wars to life at Disney Parks. You can listen to the planDisney Podcast on all your favorite podcast platforms or join the panelists on set aboard the Millennium Falcon on the Disney Parks YouTube channel.

Star Wars: Tales from the Galaxy’s Edge at Disney Springs

Meta Quest, ILMxLAB – Lucasfilm’s award-winning immersive entertainment studio – and Disney Parks are excited to continue their collaboration by bringing the Meta Quest 2 preview of Star Wars: Tales from the Galaxy’s Edge to Disney Springs West Side from May 2 through July 21.

The hands-on preview will showcase a short version of ILMxLAB’s virtual reality experience Star Wars: Tales from the Galaxy’s Edge, which expands the world of Batuu like never before. Fans who complete the experience on May 4 will receive an exclusive poster featuring the Guavian Death Gang cell operating on Batuu and their merciless leader, Tara Rashin.

In honor of Star Wars Day, DCappella — Disney’s premier a cappella singing sensation — unveiled a video for “Cantina Band,” their take on the song composed by John Williams which appeared in the 1977 film, Star Wars: A New Hope. This marks the first time an outside film crew was permitted to shoot within Oga’s Cantina in Star Wars: Galaxy’s Edge at Disney’s Hollywood Studios at Walt Disney World Resort and the first music video ever captured on site. The song is part of “Magic Reimagined,” the latest EP by DCappella released on Friday and available now.

Want more Star Wars: Galactic Starcruiser fun? The Walt Disney Imagineering team that has created so many #DisneyPaperParks activities is also celebrating May the 4th. Learn how you can make your own paper model of the Halcyon starcruiser, complete with tiny paper cut-outs of some of the many characters you can meet on the immersive two-night voyage.

Star Wars Day goes beyond just May 4 at the Disneyland Resort. Don’t miss any of the limited-time experiences this May and June in addition to all the interstellar adventures already found at both Star Wars: Galaxy’s Edge and Tomorrowland in Disneyland park year-round.

You don’t have to travel to a galaxy far, far away to indulge in some tasty treats and superb sips celebrating May the 4th! This year, Disneyland Resort and Walt Disney World Resort are joining in on the adventure by serving up items that are out-of-this-world! Explore the May the 4th Foodie Guide and try as many items as you can. Jump to lightspeed and get to it!

Over on TikTok, the Star Wars text-to-speech voices are back for #StarWarsDay. You can add audio using the voices of C-3PO, Chewbacca and a Stormtrooper for a limited time, now through May 15.

Stay tuned to the Disney Parks Blog and the Star Wars at Disney Parks topics page throughout the day for more May the 4th and Star Wars updates, including brand-new merchandise coming your way!