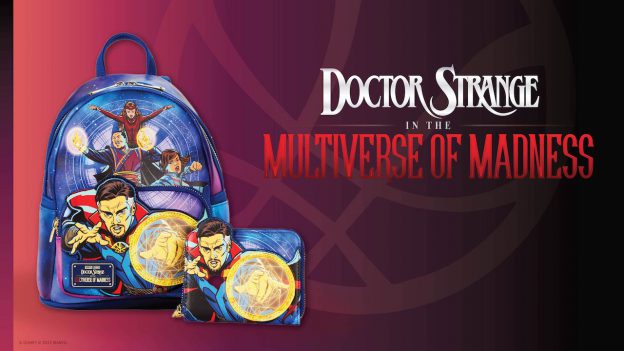 Calling all sorcerers and fanatics of the Mystic Arts, it’s officially May 6 which means “Doctor Strange in the Multiverse of Madness” is in theaters now! And I don’t know about you, but I’ve been counting down the moments until I would be reunited with Earth’s mightiest sorcerer, Stephen Strange (or should I say, Doctor Stephen Strange), on the big screen. Looking to celebrate the film’s release? Disney Parks is full of ways to jump into the multiverse.

Things are becoming strange at Avengers Campus, and you never know who you’ll run into from the Multiverse. Starting today at Disney California Adventure park, for a limited time, you can have a heroic encounter with America Chavez, or journey into the mystical side of things with the Scarlet Witch.

Also debuting at Disney California Adventure park, train your Spider-Bot with an all-new set of skills inspired by Doctor Strange straight from the Worldwide Engineering Brigade – also known as WEB. Similar to other Spider-Bots released in Avengers Campus, these bots put you in control of the action to battle opponents with programmed combat and defensive abilities. They can crawl backward and forward, crouch, spin 360°, stare down with their laser eyes, attack opponent Spider-Bots and even blast off their shields. You never know what new skills you will discover with this tactical upgrade!

While you prepare to take on the Spider-Bots aboard WEB SLINGERS: A Spider-Man Adventure, you can also upgrade your WEB Tech with an all-new Doctor Strange gauntlet that will help further customize your experience.

Want even more adventures after your viewing of “Doctor Strange in the Multiverse of Madness”? A doorway to the Multiverse is now open at the Disney PhotoPass Studio at Disney Springs. As of May 5, guests visiting this location can capture photos with a special Magic Shot and virtual backdrop.

Enhance Your Journey with shopDisney

Step into the unknown with an array of products available now on shopDisney. First up on my list of favorites is the Limited Edition America Chavez Doll, complete with a denim jacket that says “Amor es Amor” (Love is Love) on it. Next, we have an action figure of the Sorcerer Supreme himself, Doctor Strange, and bonus points – it talks! For fans of the Scarlet Witch, we have an amazing Doctor Strange and Scarlet Witch Action Set. And last, but certainly not least, is our Doctor Strange in the Multiverse of Madness Limited Edition MagicBand 2 which features the entire heroic crew on it.

From Doctor Strange and Scarlet Witch Funko Pops, to LEGO sets, to Loungefly backpacks, and apparel from Amazon, Hot Topic, Box Lunch and beyond – our licensed partners have conjured up quite the collection.

Experience the Multiverse Yourself Today

Are you ready to test the limits of reality? I know I am. Make sure to stop by your local theater and watch “Doctor Strange in the Multiverse of Madness” today!

But, before we go, I have one last thrill for you all – a greeting from Doctor Strange and America Chavez themselves, Benedict Cumberbatch and Xochitl Gomez!

Till next time – see you in the Multiverse.