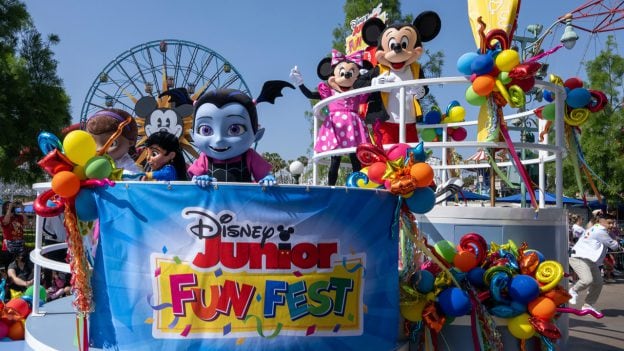 The first-ever Disney Junior Fun Fest was a magical celebration of beloved Disney Junior characters and stories. This one-day event took place April 29, 2022 at Disney California Adventure park, adding to the family fun guests of all ages can experience throughout the Disneyland Resort year-round.

From parades to dance parties and photo walls to sing-alongs – there was music, laughter and fun for Disney Junior fans of all ages. Check it out!

Fun Fest was extra special for Wish kids Kemuel, Noah and Levi, who were invited to be the guests of honor in the parade of beloved Disney Junior characters. We announced that day – which happened to be World Wish Day – that wish granting is on its way back at Disneyland Resort! Since the wish that inspired the founding of Make-A-Wish was granted on World Wish Day 42 years ago, Disney and Make-A-Wish have worked together to make more than 145,000 wishes come true. In fact, the very first official wish took place at Disneyland Resort!

Disney Junior Fun Fest was just one day, but throughout the year, families visiting with preschoolers will find unforgettable experiences across Disneyland Resort. Dance with some of your favorite characters at Disney Junior Dance Party, step into the fairy-tale worlds of Fantasyland, blast into the future in Tomorrowland, and so much more!