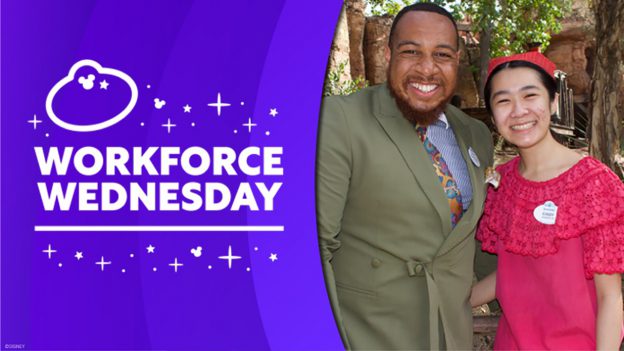 How does one define success? Is it found in a fulfilling career, a major of study, a particular achievement? For food and beverage cast member, Cindy Nguyen, she learned how to define her own meaning of success and found clarity during a point of confusion in her life, all thanks to the collaboration between Orange County United Way, the Disneyland Resort, and an outstanding motivational speaker and Disney leader, Princeton Parker. This community workforce development initiative has served thousands of individuals within the Anaheim area, and this is one of those stories that demonstrates the power and possibility of what can happen through connection.

With a passion for developing youth, Orange County United Way collaborates with schools in the Anaheim Union High School District in addition to companies like the Disneyland Resort to expose students to career possibilities and opportunities.

“One of the exciting parts of this relationship we have with the Disneyland Resort is that we’re targeting schools within the Anaheim area to give them equity, career awareness and life skills they need,” shares Sergio Contreras, executive director, United for Student Success at Orange County United Way and former Disneyland Resort cast member. “Through the collaboration, Disneyland Resort provides the funding to offer workshops for our students to hear first-hand from cast members that look like them and sound like them to learn about everything from leadership development, to resume building, to interview skills… all those soft skills that they would most likely not learn in school that they’re going to need.”

While support of Orange County United Way’s Youth Career Connections program began in 2017, it grew in 2021, allowing United Way to expand their reach to 10 high schools within the district. Even in the midst of the pandemic, they were motivated to create virtual experiences to continue their mission. Cindy was one such student who was deeply impacted by these virtual leadership development opportunities as a junior at Magnolia High School.

Growing up, Cindy had a natural gift for excelling in her schoolwork, but found that she placed undue pressure on herself to meet others’ expectations. Before taking these classes, she felt lost and confused as to where she wanted to attend college and what career path to choose. After participating in United Way’s program with Disneyland Resort, she felt the courage to embrace her path of studying computer science at California State University Fullerton! One speaker in particular, a leader from Disneyland Resort named Princeton Parker, left an indelible impression that helped catalyze her positive trajectory.

No stranger to public speaking, Princeton grew up preaching at his local church, and when he became a cast member, he was selected to be a speaker for Disney Dreamer’s Academy at the Walt Disney World Resort.  This program invites 100 exceptional young students between the ages of 13-19 each year to participate in an exclusive four-day event where they have a chance to listen to celebrity speakers, learn from Disney leaders and executives, and leave with a sense of motivation and hope for their future. As many of the speakers and fellow students were also from the Black community, Princeton cites this program as making him feel represented in the Disney brand for the first time, and has been involved over the last 11 years as a speaker, essay judge and media representative.

So, it is no wonder that when Princeton became a food and beverage manager at the Disneyland Resort, with his motivational speaking experience in mind, his leaders jumped at the opportunity to recommend him for the Disney Speakers Bureau that would give him the chance to share his story and help inspire students through the workforce development initiative. It combined his love of empowering others to see their full potential and supporting important work in the community with United Way.

When he speaks to groups of students, Princeton emphasizes the importance of focusing on one’s identity before deciding what to do in life and career:

“When we identify who we are first, the what we want to do becomes clearer and more intentional,” Princeton expresses. “It is amazing to see their eyes when they see who they are first. What the students are most passionate about is clarity, confidence, and courage to now act out what they’ve become clear about. It is an opportunity to not just talk about career development, but to empower the individual behind the career. That’s what Disney magic is all about…it is empowering you to be the hero in your own story.”

As Cindy listened to Princeton’s presentation, she took his message to heart and learned how to define her own success, rather than comparing herself to others.

Princeton’s words emboldened Cindy so much that she applied to work at the Disneyland Resort!  During her interview, Cindy made sure to mention the impact that Princeton had left during the virtual leadership sessions through United Way. The recruiter was so moved by Cindy’s story that he reached out to Princeton to share that he “had the pleasure of hiring” Cindy to work in food and beverage at Disneyland park, the same department Princeton worked in when he presented to Cindy’s school, yet another connection point.

Princeton was elated and grateful to have had a small role in Cindy’s journey:

“Cindy, you represent the very reason why I do that [speak to students],” Princeton shared with Cindy directly as they had a special opportunity to meet again via zoom. “It’s not just that someone comes to work for Disney, that’s just icing on the cake. But it’s that students feel empowered to trust the answer they’re looking for is within,” he shared. “This is the work that makes me believe that I have a purpose within the company.”

Princeton and Cindy’s story is a testament to how powerful those moments of connection can be, even in virtual settings. Cindy hopes to impart the values that she learned through these sessions to her fellow cast members and classmates at California State University, Fullerton who may be struggling with comparison or confidence.

“Thank you so much for the speech and everything because even right now I’m stressed because of work and school and finals are coming up. But I know I’m going to be okay…” Cindy shares with a beaming sense of gratitude and appreciation. “I remember who I want to be versus what I want to do, and about success—as long as I enjoy what I’m doing and I’m happy doing it, then I feel like that’s success to me.”