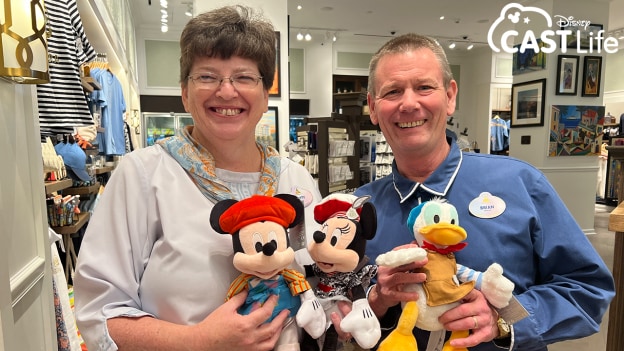 Patty and Brian have been married for 35 years, and they’ve always had a love of all things Disney. On an anniversary trip to Walt Disney World Resort in 2016, they struck up a conversation with a Magic Kingdom Park cast member about her experience working at Disney. “The cast member we spoke to loved her role and the company,” Patty says. “She told us that lots of Disney couples come down to Florida and work together, and so we put the plan in motion to make it happen. We thought, ‘Wow! What an opportunity to make our dreams come true!’”

In 2017, they made their dream a reality and moved to Orlando to become Disney cast members. They started their merchandise journey in DinoLand U.S.A. in Disney’s Animal Kingdom Theme Park, and they’ll never forget the magic they created there. “We used to work at the glow carts together. We had such a great time showing families the different nighttime merchandise and seeing their eyes light up,” Brian says. “When we had the chance to make even more magic and work at Disney’s Riviera Resort, we were so excited!”

Brian and Patty say there’s never a dull moment working together at Disney’s Riviera Resort. Whether it’s catching up with a family returning to the resort (they’ve had families come by La Boutique just to see them!) or finding that perfect pin for an avid collector, they love creating special moments for guests. “Working for Disney is unlike anything,” Patty says. “I love the atmosphere and I still get excited when I make magic for guests. They make the magic for me, every day. And working with my husband just makes it even more magical because we get to make these lifelong memories together!”

The love of Disney also runs in their family; Patty and Brian’s daughter is a server at Kona Café in Disney’s Polynesian Village Resort, and she’s utilized Disney Aspire – an educational investment program for cast that provides 100% tuition paid up front at select schools – to complete her master’s degree in Creative Writing.

“The Walt Disney Company is known for taking care of their guests, but the great thing is, they take care of their cast as well,” Brian says. “I have the best job in the world, and the best coworker too!”