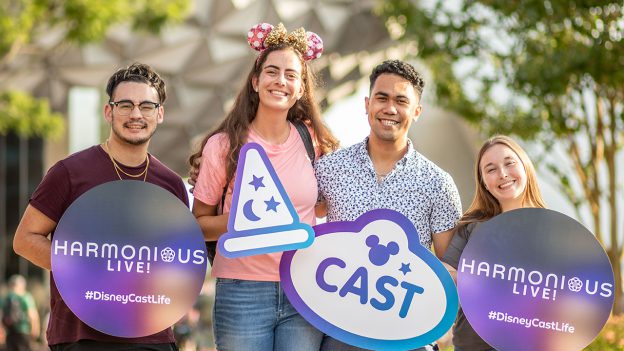 As Disney cast members, we get access to some incredible experiences – from backstage and behind-the-scenes, to under the spotlight and in the action! Such was the case for a crowd of excited cast members last night, during the first-ever Disney+ livestream from EPCOT: “Harmonious Live!”

While there are beautiful views of “Harmonious” all around World Showcase Lagoon every night, Disney cast members joined the audience for a close-up experience on June 21, where the Snow Queen herself Idina Menzel was joined by special guest Auli’I Cravalho for an unforgettable performance.

“This is the coolest Disney cast member thing I’ve done in my life,” said Joseph Robinson, a Bell Services Dispatcher at Disney’s Animal Kingdom Lodge. “I just love ‘Harmonious,’ and then to experience ‘Harmonious’ with a full orchestra? It exceeded every expectation I had … It literally brought me to tears.”

When it debuted on Oct. 1, 2021, with the Walt Disney World 50th Anniversary celebration, “Harmonious” brought EPCOT visitors on a worldwide tour of the power of music, reinterpreting classic Disney songs with 240 artists from around the globe. This first-of-its-kind live performance put the spotlight on this incredible nighttime spectacular – and on an audience full of cast members who make magic at Walt Disney World Resort every day.

“Seeing the performers sing along with ‘Harmonious’ brought me to tears, and I got goosebumps,” Christie Ritchotte, an EPCOT Guest Relations cast member, said. “It’s such a special time to be a cast member – we get to celebrate the 50th anniversary of Walt Disney World. We get to be here for everything new at EPCOT. It’s such a privilege.”

If you missed the livestream event, don’t worry – “Harmonious Live!” is now available on Disney+ in the U.S. and Canada for subscribers to watch anytime. For more stories about cast members and their #DisneyCastLife, keep following the Disney Cast Life Blog!