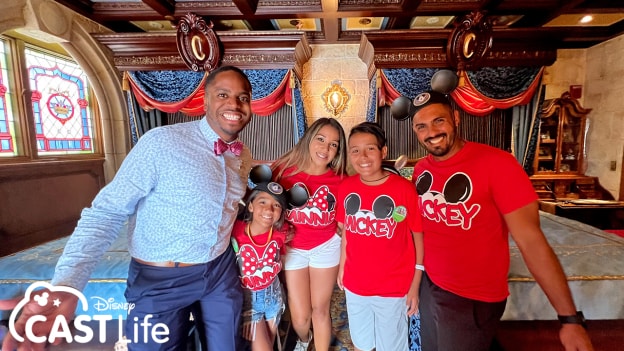 At the top of Cinderella Castle at Magic Kingdom Park, a beautiful suite is nestled within the turrets where the clocks all remain at 11:59 p.m., magic lies in each corner and one, glass slipper rests as a reminder to always dream.

This is the Cinderella Castle Suite, and one lucky engineering cast member, Fabian Arango, got to spend the night there with his loved ones thanks to Magic Backstage – a sweepstakes program just for Disney cast members

Fabian’s tale began a lot like Cinderella’s – starting with a surprise. Members of the Magic Backstage team and Walt Disney World Ambassador Raevon Redding popped in during one of Fabian’s meetings and, with a “Bibbidi-Bobbidi-Boo,” he was off to the ball.

“I was speechless,” Fabian explained. “I entered the sweepstakes because it was my 15th wedding anniversary, and I thought it would be something special to share with my wife. And here we are!”

With the wave of a magic wand (about a week later), Fabian and his family were swept away to Magic Kingdom for their once-in-a-lifetime experience. After meeting up with Raevon, they were led up a special elevator into the Cinderella Castle Suite. From 14-karat gold molding and a 200-year-old writing desk to stained glass windows depicting Cinderella’s story, it is clear they stepped into a Fantasyland fairytale.

“It was a magical moment with my family that we will never, ever forget,” Fabian said.

But the fun didn’t stop there. Fabian and his family received VIP treatment during their visit to Magic Kingdom, including dinner at Be Our Guest, access onto any ride they wanted and exclusive fireworks viewing. But their favorite part of their evening? The master bathroom. Immediately upon re-entering the castle suite, Fabian’s kids Julianna and Fabian Jr. asked to take nice, long bubble baths in the marble tub.

To close out their fairytale, Fabian and his family met Cinderella herself at Cinderella’s Royal Table and enjoyed breakfast together. It was a #DisneyCastLife moment they will remember forever, and a stay that was only possible thanks to special programs for cast members like Magic Backstage.