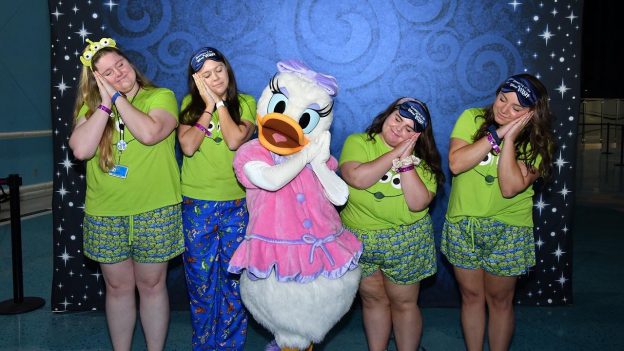 The Disney Wish officially arrived in Port Canaveral, and cast members woke up bright and early to witness the historic moment. What better way to enjoy an early morning than with a pajama party? Cast dressed in their comfiest Disney pajamas and loungewear to welcome the Disney Wish home.

As they waited for the ship to arrive, the cast celebrated inside Disney Cruise Line’s newly renovated terminal, enjoying Disney Wish-themed treats and snapping photos with Donald Duck and Daisy Duck, who were also sporting their PJs.

As soon as the ship appeared on the horizon, the viewing area started buzzing with anticipation. Cast watched the ship enter the channel in awe while “When You Wish Upon a Star” trumpeted from the ship’s horns, and accompanying boats provided the traditional water salute.

As the Disney Wish sailed closer, cast remarked on how grand it was to see her in person. This moment, six years in the making, made this dream a reality for so many.

“Watching the Disney Wish sail in for the first time was an amazing experience and hard to put into words. After years of planning and hard work to finally see her coming home was surreal and emotional,” Disney Cruise Line medical services representative Colleen said. “My favorite part was getting to see just how many different teams were represented at the event. It showed just a fraction of the people who have worked towards this big moment of bringing her home!”

One of the more emotional highlights during the arrival was cast and crew calling out to each other from both land and on board the ship. Cast excitedly searched for friends and coworkers waving from the upper decks and balconies. Shipboard teams were welcomed home with smiles and applause after 11 nights at sea, traveling more than 4,700 nautical miles across the Atlantic Ocean.

“Watching the ship sail into the port with my team was a full circle moment for me!” Disney Cruise Line senior recruiter Meagan said. “From having the opportunity to interview our new crew members who have helped launch the Wish, assisting with their arrivals in Amsterdam and then getting the opportunity to be one of the first to greet them upon their arrival was magical!”

We can’t wait for you to sea the Disney Wish for yourself! Be sure to tune in for the Disney Wish christening live at 11 a.m. ET on Wednesday, June 29 right here on the Disney Parks Blog or on Facebook, YouTube, Twitter and TikTok.