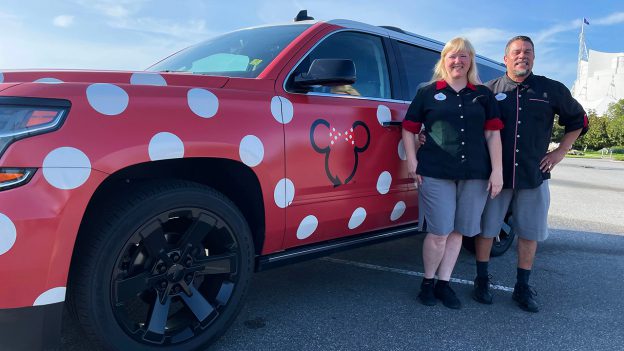 Kelly and Julio Concepcion are among more than 75 drivers returning to welcome guests back aboard Minnie Vans Connected by Lyft. For this married couple, being part of the Minnie Vans team means more than whisking guests around property; it means being part of a family.

The pair met in Chicago and moved to Florida in 2013. Both earned jobs at Walt Disney World Resort soon after, but in 2017, Kelly spotted an exciting new opportunity and knew she had to apply. After a few rounds of interviews, Kelly officially became one of the very first Minnie Van drivers and quickly formed a new circle of friends.

While Kelly played trivia with guests in her Minnie Van, Julio made magic on Main Street, U.S.A. Magic Kingdom became their special place, so when it came time for Julio to propose, he knew he had to do it there … and with an assist from Kelly’s favorite character, Stitch!

When her fellow Minnie Vans cast members heard the news, they celebrated in style with a Mickey Mouse cake. They had gotten to know Julio, too, because he would pick Kelly up from work each night. One of Kelly’s leaders asked when he planned to join them on the Minnie Vans team, and the rest – Julio said – is history.

On each wedding anniversary, Kelly and Julio’s Minnie Vans family help their favorite couple celebrate in style. For their first anniversary, a leader reserved a table in their break room and helped plan a special anniversary dinner for them. The next year, the team surprised them with chocolate-covered strawberries.

“We have the best team, hands down,” Kelly said.

“It feels like family,” Julio added. “It’s a unique environment, and we love it.”

Both Kelly and Julio said they love what they do, the people they work with and the guests they get to know each and every day. But what makes their day just a little more special is seeing each other out around Walt Disney World in their Minnie Vans.

“It’s funny when we pass each other on the road,” Kelly said. “I picked someone up the other day, and Julio happened to be there. I said, ‘You know the gentleman that just opened the door for you? That’s my husband!’”

Julio and Kelly transported guests across Walt Disney World during the Minnie Vans testing period, but both are looking forward to the service’s official reopening.

Walt Disney World guests can order a Minnie Van – driven by expert Disney cast members like Kelly and Julio – using the Lyft app beginning June 29. And, as a special treat to celebrate the service’s return, Lyft is offering guests who order a Minnie Van on June 29 and 30 a $5 coupon to use on their next standard Lyft ride while supplies last.*

A big thank you and congratulations to Julio and Kelly – and ALL Minnie Van drivers – for relaunching this fan-favorite service!

* Coupon provided by Lyft is not valid for use on Minnie Van rides.