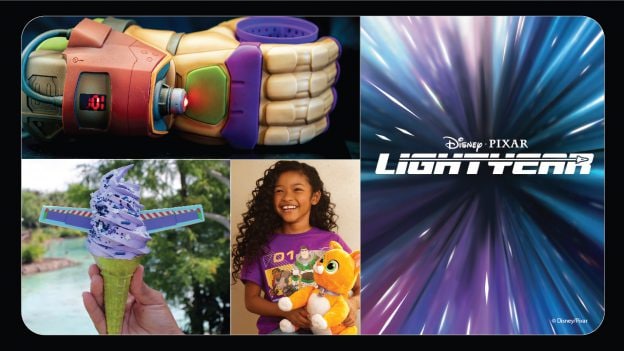 I hope you’re ready for action, because that’s exactly what we’ve got in store for you to celebrate the official release of “Lightyear” across Disney Parks. From character encounters to merchandise, food offerings, and more, we’ve got all things “Lightyear” in honor of our favorite spaceman. Let’s blast off together and see what’s new!

Captain Buzz Lightyear has just landed in Tomorrowland at Disneyland Resort. To infinity and beyond!

Shop the Latest Collectibles and Games

If you can’t hit the parks, shopDisney is the place to go for all things “Lightyear.” Here are a few of my favorites:

Starting off with the hero himself, on shopDisney, and coming soon to Disneyland Resort and Walt Disney World Resort, you will find the Laser Blade Buzz Lightyear Talking Action Figure! Featuring lights, motion, and more than 30 sounds, this action figure brings the excitement of the film wherever you go.

Beep, boop! Buzz’s adorable, robotic companion, Sox, has been transformed into a cuddly plush. Complete with poseable features, this plush can also be found on shopDisney.

Inspired by IVAN, Buzz’s autopilot computer system, the Lightyear Belt Bag will assist you on all your missions while making you look super out-of-this-world.

But wait – there’s even more merchandise to complete your mission. Also available on shopDisney are Buzz’s ultimate foe, Zurg, and Buzz’s XL-15 rocket ship thanks to our licensed retail partners, Mattel and LEGO (make sure to stop by the LEGO Store at Disney Springs to also find the XL-15 rocket ship). And of course, who can forget Buzz’s friend, Izzy Hawthorne, found in FUNKO Pop form on Amazon!

Want to experience all the action firsthand? Walt Disney Games has got you covered! The much-anticipated mobile game Disney Mirrorverse is launching on June 23, just as Zurg crushes his way into the new, divergent universe! Massive and imposing, Zurg is amplified to formidable levels within the Mirrorverse. Complete the second stage of Chapter 2 in the Mirrorverse story to play the exciting in-game event “Fractured Infinity.” The event features Zurg as a fearsome foe for your Mirrorverse Guardians and is available for a limited time from June 23 through July 31. Prepare to enter new worlds with evolved Disney and Pixar characters like you’ve never seen them before when Disney Mirrorverse launches on mobile June 23 – don’t miss it!

Are you ready for the mission, Space Ranger? Follow Captain Lightyear through his blockiest intergalactic adventure, telling the tale of his origin. Play the Minecraft “Lightyear” DLC to take on five galactic missions, use nifty gadgets, and drive awesome vehicles. Team up with friends and go deeper into space than ever before! Launch into the Lightyear Item Event featuring Captain Lightyear and Sox now until June 19th in Disney Emoji Blitz!

If curling up with a good book is more your style, hang on to your helmets! Our friends over at publishing have a whole library full of amazing “Lightyear”-themed books, including the classic telling of the tale, “Lightyear a Little Golden Book,” and “The Art of Lightyear” which provides a behind-the-scenes look at art from the film.

Swirl Into Space with Yummy Treats

I don’t know about you, but I’m a fan of anything sweet, and over at Swirls on the Water at Disney Springs in Walt Disney World Resort, you’ll find exactly that with the Buzz Lightyear Star Commander Cone! Purple cheesecake soft-serve, adorned with chocolate wings and space sprinkles, this treat will take your tastebuds on a journey. But hurry on over as the cone is only available till June 30, 2022.

If your sweet tooth is craving a drink instead, zoom over to select locations in Tomorrowland at Disneyland park and Pixar Pier at Disney California Adventure park for the all-new Lightyear Gauntlet which perfectly holds your drinks. Limit two (2) per person, per transaction, available while supplies last.

Watch “Lightyear,” Out in Theaters Now

Are you ready to go explore the great beyond with Buzz Lightyear – the hero that inspired the toy? I know I am! Watch “Lightyear” now out in theaters, and be sure to leave a comment letting me know how you celebrated the film’s release.

To infinity, and beyond!