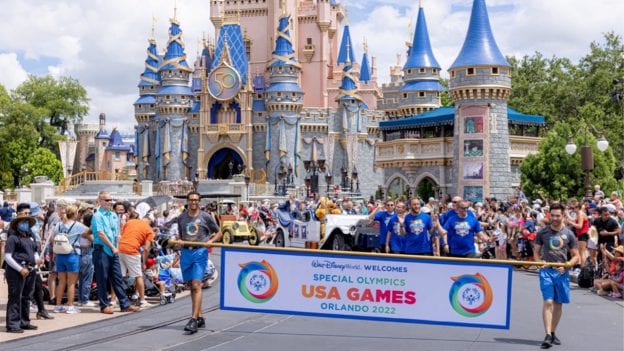 The athletes, who are being featured in a TV commercial similar to Disney’s iconic Super Bowl ad, were celebrated as honorary grand marshals Friday in a festive parade down Main Street U.S.A., at Magic Kingdom Park that included all the bells and whistles—popular Disney characters, lively entertainment, streamers and music amid a sea of cheering guests.

The parade was part of the final leg of the official Special Olympics USA Games Law Enforcement Torch Run that began in Chicago and ended at Exploria Stadium in downtown Orlando. It was a colorful scene reminiscent of Disney championship celebrations that regularly feature some of the biggest names in sports history.

The magical welcome celebration of the Special Olympics USA Games, which kicks off Sunday with the Opening Ceremony, adds to Walt Disney World Resort’s long history of supporting the Special Olympics, having staged various events at ESPN Wide World of Sports Complex year after year. The majority of the competitions at this year’s USA Games are taking place at the Disney sports complex, including basketball, powerlifting, volleyball, soccer and track & field.