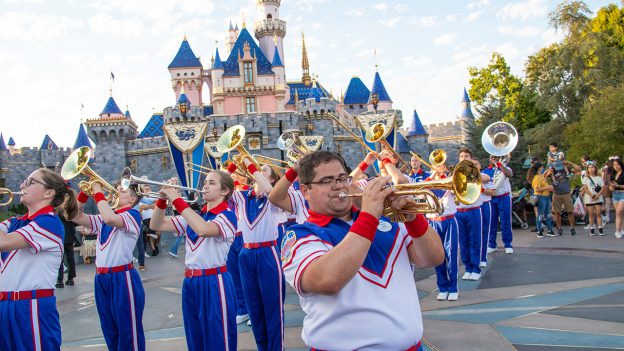 Nothing sounds like summertime in Disneyland Park like the energetic marching band vibes of the beloved Disneyland All-American College Band, which is back after a two-year absence — just in time to celebrate 50 years of performances on Main Street, U.S.A.

A Disneyland tradition dating back to 1971, the Disneyland All-American College Band (AACB), presented by Yamaha, is comprised of 21 outstanding musicians from colleges and universities across the country. They spend 11 weeks as cast members, performing in Disneyland Park under the leadership and guidance of outstanding Disney music clinicians including jazz trumpeter Wayne Bergeron, saxophonist Sal Lozano and many others.

Due to a pause during the pandemic, the last band performed during the summer of 2019, meaning this year’s band, which debuted in the park June 21, is the 50th to march in-time down Main Street, U.S.A.

“It’s pretty surreal that it kind of worked out that way,” said band member Jit Chatterjee when asked how it felt to be part of the 50th band. “I’m just so happy to be part of the 50th and I’m so grateful to be working for Disney.” Jit is the band’s snare drummer and an audio engineering and jazz drumming major at William Paterson University in New Jersey.

Like Jit, many of the band members have waited years for the chance to perform at the Disneyland Resort. Emma Nixon, a recent graduate of the University of Idaho with a degree in French horn performance and music education, was one of 350 musicians who auditioned back in February of 2020, weeks before the pandemic closures.

“I went to New Orleans for a jazz educators festival that was happening and I knew [that AACB was] doing auditions there,” said Emma. “Then I got a call about three weeks before we got here [in May 2022] and they were like, ‘We need a new horn player. Can you show up?’ and I said ‘Absolutely.’”

This year’s band represents musicians from 13 universities across 10 states, and students range in age from 21 to early 30s.

Connor Frederick, a doctoral student working on his musical arts degree from the University of Miami, first picked up a trombone at age 10 under the guidance of his parents, both band directors. Connor’s sister, an AACB alumna from 2018, inspired Connor to audition.

“She didn’t stop talking about the band for years. It was a really life-changing experience for her,” said Connor. “It’s really cool to know that both me and my sister have gotten the chance to go through this awesome program. … I feel like I have a lot to live up to. It’s a good kind of pressure.”

Connor isn’t the only band member with familial ties. Emma’s mom was a trumpeter in the 1989 band. “Now, we’ve both gotten to have the same experience with different people with the same music in the same place,” said Emma. “It’s so fun. My mom and I are even going to get matching Disney tattoos.”

The band is known for its crisp quarter notes and perfectly crafted crescendos, but members also spend a great deal of time learning choreography meant to bring classic Disney soundtracks to life.

“You’re not just on the stage playing what’s on the page. It’s the showmanship. It’s the storytelling,” said Jit. “It’s what I really love that Disney does. … Our sets, every move that
[Show Director Linda Simmons] creates and every note has a reason and it all comes together. The overall piece of work has a wonderful story.”