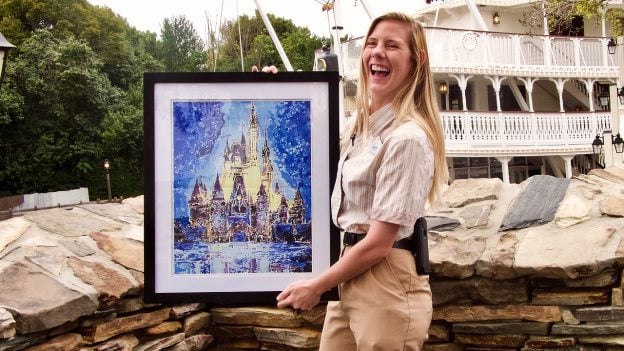 Drawing Connections with our Disney Cast: Kindness, Goodness and Magic

There are few things more heartwarming than the countless stories we hear about the special bonds between our cast members and guests. The ways you all share your love and appreciation – from Mobile Cast Compliment shoutouts to cast member-inspired outfits—light up our days and keep us all connected to the magic.

This brings us to Drew, a young man from Wisconsin, who used his artistic talent to create a beautiful, one-of-a-kind painting of Cinderella Castle and dedicated it to us for all the magic we create at Walt Disney World Resort.

Drew set out to make us feel that same love and excitement he feels each time he visits Walt Disney World Resort, and—oh my goodness—did he succeed!

“When I opened the painting, my heart stopped. My jaw hit the floor. I started to tear up. The love that flew out of that box hit me square in the gut,” recalls Aura, a food and beverage host at Disney’s Yacht Club Resort. As a friend of Drew’s family, Aura was Drew’s connection to Walt Disney World cast.

But Aura knew she couldn’t keep the painting for herself. It was immediately clear to her that this needed to be shared with as many cast members as possible.

As the painting began to make its way around Walt Disney World, that same kinetic magic and emotion that struck Aura filled the room each time our cast members encountered Drew’s artwork for the first time. Often, smiles, tears and awe overtook their faces. Drew truly achieved his goal: the cast members at Walt Disney World received his message of kindness, love and connection—over and over and over again.

Drew’s mom sees that special connection between cast members and guests each time they visit. “I know every experience while we’re at Disney is especially fun because of all the interactions Drew has with the people, the cast members who look at him with love and excitement,” she explains.

In a way that can only be described as magical, our cast members knew they had to return Drew’s act of kindness tenfold. Cast members from around the resort posed with the masterpiece to create a very special photo album displaying just how impactful this compassionate gesture was.

Drew received this album in time for his favorite day of the year—World Down Syndrome Day—with photos of hundreds of smiling faces from every inch of our world embracing his masterpiece and sharing the love.

Through his artwork, Drew made magic for people who typically spend their time doing so for others.

“I don’t know who has impacted who the most. Gratitude and love are pouring out from all directions,” Aura says. “This has been a beautiful and wonderful experience. This is Disney.”