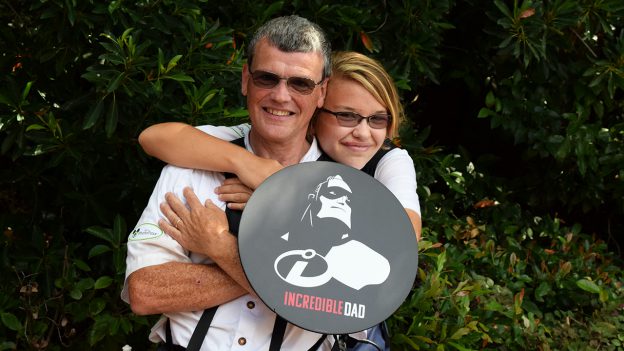 Father & Daughter Share Bond of Working Together at EPCOT

One of Brogan’s first memories of photography is taking photos at Disney’s Animal Kingdom Theme Park during a vacation when she was a child. Her dad Stuart, who has held a lifelong love and appreciation for photography, gave her his camera and told her to go for it. Well, she certainly took that encouragement to heart. Since then, their shared love of Disney and passion for photography eventually led to both of them becoming Disney PhotoPass photographers at EPCOT!

For this pair, being photographers at Walt Disney World Resort is a fit more perfect than a glass slipper, and I had the pleasure of meeting them and hearing their story.

As Brogan says, “This is literally my dream job. But what makes it even better is I get to work with my dad.”

“I’ve been doing photography all my life,” Stuart notes. “My dream job was to be a Disney photographer, and here I am living my best life with my daughter in ways you can’t imagine.”

Stuart’s Disney journey also began as a guest. When most people first arrive on Main Street, U.S.A., they’re captivated by Cinderella Castle. Not Stuart. It was a Disney PhotoPass photographer who caught his eye – so much so that his wife had to remind him that they couldn’t spend their entire day watching photographers! He knew he wanted to do that job one day.

Years later after the family moved to Florida, Brogan was the first to begin working at Walt Disney World Resort (as a photographer, of course!).

And just as he’s done her entire life, Stuart continued to support her as she began her Disney career – actually, pretty much the second she started. Before she had even finished her Disney PhotoPass training, he was there. During a training exercise in EPCOT when she was taking photos for guests, Brogan recalls, “He pretty much made sure the whole line knew he was my father.” When it was his turn for Brogan to snap his picture, he asked for countless photos … with Brogan’s mom, a Disney PhotoPass Coordinator, and many other guests all watching. To this day, Stuart still cherishes one of the photos taken during this training session.

When her dad finally joined the Disney PhotoPass team, Brogan had the same opportunity to watch him shine. She loves seeing his excitement as he works and the spark in his eyes when he’s interacting with guests. She’s also thrilled knowing so many others will receive the same quality of photos that he’s taken of her for her entire life.

With both capturing memories at EPCOT, they have many opportunities to work together and learn from each other – and they love it.

Aside from making sure guests know he’s her dad whenever he can, Stuart has also given Brogan photography pointers, taken her on photo walks to help her find her technique, and taught her about the importance of never giving up and sticking to what she believes in. Brogan wisely shares, “Being able to reach out to him is an incredible thing, because you never know what wisdom you can get from a parent.”

Meeting them and having the pleasure of hearing their many heartfelt (and hilarious!) stories of working together, it’s clear they bring out the best in each other. “She teaches me. She keeps me grounded in what we do,” Stuart concludes. “She reminds me to keep the magic. She reminds me that we are magic. And right back at her, she is magical to me every day of the week.”

I hope you have the chance to capture photos with Brogan and Stuart the next time you’re at EPCOT! To enjoy more highlights of Disney PhotoPass cast members, follow Disney PhotoPass Service on Facebook, Instagram and Twitter.