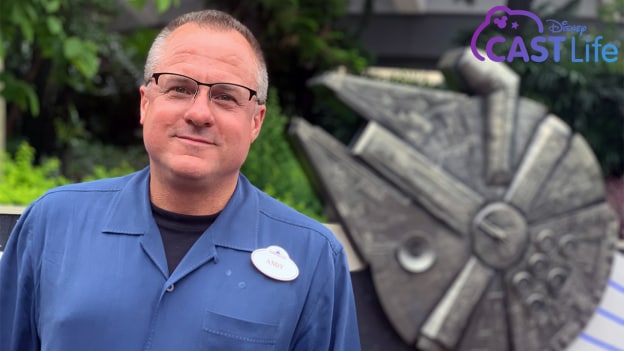 “Technology in the park is tricky because you don’t want anybody to notice it,” says Andy, a 32-year Disney veteran. “Everyone can go about their day and do all the things they want to do, and be enabled by the technology.”

Andy’s dream of being on a theme park opening team came true when Hong Kong Disneyland opened in 2004. He spent nearly a year spearheading the installation of ticketing and FASTPASS systems at the park, and eventually decided to stay permanently. His small team focuses on creating an inclusive work environment full of Disney culture.

“Everybody in technology knows each other on a personal level,” Andy says. “That’s one of the reasons I wanted to stay at Hong Kong Disneyland. I felt like I had more influence here, and I was making a bigger difference.”

Andy and his team recently created the technology behind the Royal Food and Drink Fair, Hong Kong Disneyland’s special dining event, developing “e-Tokens” which could be pre-purchased and exchanged for food and beverage items by scanning a convenient QR code. These helped guests bypass lines and spend more time enjoying yummy treats and new entertainment.

“We ask how we can support our cast and guests and make things as seamless as possible for them,” says Andy, whose team is keeping the excitement and momentum from that project going as they continue developing new experiences. “[We] have a lot of room to grow. … There are a lot of things we want to include in our mobile app, and we have so many different ideas. So, it’s exciting to think about what the future holds for us.”

Andy is also passionate about shaping the future through creating a culture of inclusion. He helps make a difference as chairperson of Hong Kong Disneyland’s Inclusion Advisory Council, created following the launch of the Inclusion Key, consisting of a resort-wide group of cast members spearheading continuing diversity, equity, and inclusion efforts. The council helped bring to life the resort’s recent Inclusion Spotlight, a two-day cast event that offered a variety of learning opportunities and interactive experiences.

“One of the booths we had at the event was focused around cultural diversity,” Andy explains. “We had the different cultures of Hong Kong Disneyland represented so cast members could learn about native dresses, languages, foods and other aspects. And it was really exciting to see the cast members so passionate about sharing their culture, and everyone so engaged and willing to learn.”

Andy believes being true to yourself is one the most important aspects of diversity, and he’s thrilled to continue helping every cast member’s voice be heard and represented across Hong Kong Disneyland.

“We’re 100 percent focused on integrating diversity and inclusion into our projects. With so many new services being provided, we want to make sure everyone feels included. We want to make them feel as welcome as we possibly can.”