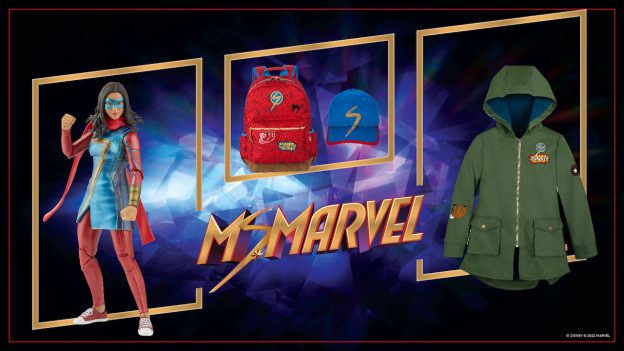 Super hero mega fans assemble… Ms. Marvel is here! The all-new eponymous series, which introduces up-and-coming actress Iman Vellani as Kamala Khan, a 16-year-old Muslim American teenager growing up in New Jersey, premieres today on Disney+! Looking to celebrate the series’ release? You can find some stellar experiences at Disney California Adventure park and awesome Ms. Marvel gear at both parks in the U.S. and on shopDisney.

Next time you pop over to Avengers Campus at Disney California Adventure park, you may just run into mega-super hero fan Kamala Khan, for a limited time. This girl from Jersey City is no ordinary recruit, though. She’s become a hero herself – Ms. Marvel. She never imagined any of this, but now the future is in her hands … and it’s gonna be cosmic!

Summer is here and you’ll want to protect your face from the sun, so if you’re at Disneyland Resort or Walt Disney World or just browsing shopDisney, pick up the Ms. Marvel Baseball Cap for Adults which has an adjustable backstrap and is embroidered with the Ms. Marvel emblem. Pack your snacks, drinks and your everyday essentials for a day out in this stylish Ms. Marvel Loungefly Mini Backpack featuring a cool all over geometric design and Ms. Marvel’s distinctive symbol.

For the younger super hero fanatics in your life, check the parks and shopDisney for the Ms. Marvel Top and Pants set, the Ms. Marvel Backpack, and the Ms. Marvel military-style jacket. Both the backpack and pants feature an allover print of assorted doodlings from teenage comic book fan, Kamala Khan. In addition, all three items are also embroidered with Ms. Marvel’s iconic insignia and “Sloth Baby” patch.

For fans of all ages, round out your super hero collection with one or both Ms. Marvel action figures! The fully poseable Special Edition Ms. Marvel Doll complete with a translucent purple gauntlet and her faux metal cuff can be found on shopDisney and will soon be available at the parks. Starting today you can pre-order the poseable 6-inch Ms. Marvel action figure from Hasbro’s Disney Plus Legends Series– perfect for kids, super fans, and collectors.

Have you met the other fantastic hero from “Doctor Strange in the Multiverse of Madness,” America Chavez? You’re in luck; the Special Edition America Chavez Doll is also available on shopDisney and at Disneyland Resort and Walt Disney World! She comes with her iconic stars and stripes denim jacket with “Amor es amor” printed on the front and the Pride flag patch on both the front and back of the jacket.

Keep an eye out as more “Ms. Marvel” products featuring all the characters from the show will continue to pop up at Disneyland Resort and Walt Disney World in the U.S.! You should also check back to see the latest merchandise inspired by “Ms. Marvel” at shopDisney. Tune in every week for a new episode of “Ms. Marvel” on Disney+!