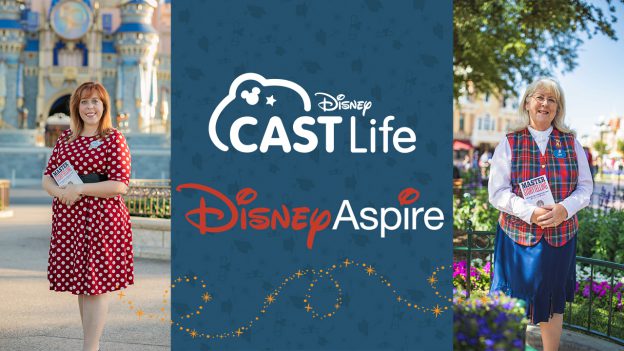 As a Disneyland park tour guide, storytelling is part of J’Amy Pacheco’s DNA. So when she neared completion of her bachelor’s degree requirements through Disney Aspire, J’Amy asked her professor for permission to design her own elective that fused her passion for storytelling with its application at work. Even better, she built the independent-study class with her Walt Disney World counterpart, Tour Guide Haylee van Dalen, whom she met in online classes as they pursued the same communications degree.

“We had so much in common; we were both Guest Relations VIP tour guides and we were both facilitators in Traditions,” J’Amy said, referring to their roles in orientation classes for new Disney hires. Taking many of the same online classes since 2019 through the University of Denver, the two women first became “study buddies” and then friends.

“The more we talked, the more we found we had in common,” said Haylee, who has worked in a variety of roles in her 15 years at Walt Disney World and recently transferred to a role with the Minnie Van Service. “Going to school online, it’s been so valuable to connect with someone who really understands the challenges of juggling work and school — especially when their work and school are pretty much the same as yours, just on a different coast.”

The pair are now in their last week of the elective they designed together, called “Leadership and Storytelling.” In the class, they explored the anatomy of storytelling and developed techniques to help leaders strengthen communication and teamwork. While it was designed to be applicable to a variety of industries, they focused on their work at Disney with the hopes that the course could eventually be adapted for cast training. “Our goal is to encourage others to use storytelling in leadership as a way to enrapture their audience,” said Haylee, who proposed the topic. “Our final deliverable for the class will be a 45- to 60-minute interactive course that the two of us can facilitate and teach to others in hopes that they will learn how to utilize personal stories as a leadership foundation.”

It’s not the first independent study course for the pair. In the previous quarter, J’Amy proposed a 10-week course called “Fairy Tales and Cultural Subversion,” exploring the origins, evolution and cultural influence of fairy tales like “Sleeping Beauty,” “Cinderella,” “The Little Mermaid” and “Beauty and the Beast” — not coincidentally, all of them tied to Disney history. When Haylee learned about the course J’Amy was designing, she asked if she could take it with her.

“The course was a fun and fascinating way to study something directly relevant to our company’s brand and business,” said J’Amy. It was so much fun, in fact, “we asked if we could create another course together!”

Haylee graduates June 11 and hopes to one day work in training and development at Disney, while J’Amy is set to graduate in August and has already started coursework toward a master’s degree in professional creative writing, also through Disney Aspire, which pays full tuition up front and reimburses fees for eligible hourly cast. They hope to celebrate together in person soon and plan to keep in touch when school is over.

“It’s hard for me to explain how much Disney Aspire has meant to me,” J’Amy said.

She had always wanted to go back to school, but marriage, work and family always seemed to move it to the back burner. When she first heard about Disney Aspire, J’Amy was in her late 50s and initially felt it was too late for her. But she couldn’t be happier she took the leap, becoming one of the first students at Disneyland Resort to enroll.

“My first day of class, I sat down at the Inn Between (cast commissary) to read my first assignment and I couldn’t see through the tears in my eyes,” said J’Amy, who joined Disney in 2015. “It sounds cliché, but there was a little tent card on the table that said ‘Disney Aspire — Dreams Within Reach’ and that moment is cemented in my mind because that’s exactly how I feel.”

J’Amy also credits her focus on school with getting her through a difficult period. In June 2019, both of her parents and her brother-in-law passed away, her husband suffered a stroke and, the same week J’Amy received her call to return to work in 2021, she was diagnosed with breast cancer. “Even with two cancer surgeries and 15 radiation treatments,  it gave me something positive to focus on,” said J’Amy, who returned to work last February. “I’ll be forever grateful to Disney for continuing to support my educational goal.”

J’Amy has dreams of using her degree to write tours or classes, entertainment content or books, but she can already see how her schooling is making her better at her job, from improving her communication skills to creating effective presentations. And she loves being able to share her Aspire story with incoming cast in Traditions classes. “I let them know that no matter where they are in their lives, dreams really are within reach with Disney Aspire,” she said. “And you can immediately see the energy in the room change when you suggest that they think about going back to school. It’s beautiful to see.”