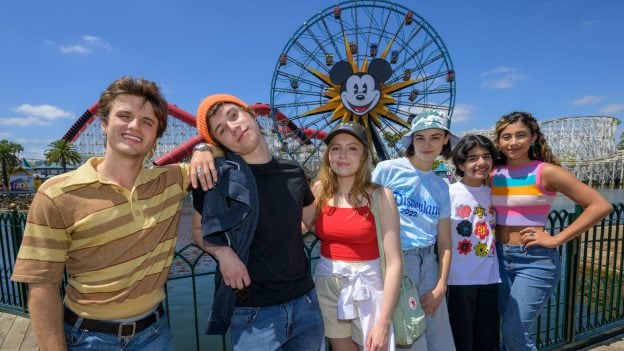 This season finds Victor going on a journey of self-discovery — not only deciding who he wants to be with, but more broadly, who he wants to be. With their post-high-school plans looming, Victor and his friends are faced with a new set of problems that they must work through to make the best choices for their futures.

For these stars, it was “one last chance to feel the love” at the Happiest Place on Earth! At Disney California Adventure park, they started their day with an exhilarating adventure aboard the Pixar Pal-A-Round in Pixar Pier, an experience that fans of the show will surely recognize as a callback to the iconic Ferris wheel moment from season one!

The stars also got a chance to meet up and snap some photos with members of the Disneyland PRIDE Business Employee Resource Group (BERG), which consists of cast members who advocate on behalf of the LGBTQIA+ community. After that they got a sneak peek (or taste) of some of the celebratory treats created just for Pride Month!

Next, they made a pitstop in Cars Land to celebrate its upcoming 10th anniversary, then headed over to Avengers Campus where they wrangled rogue Spider-Bots (with the help of some WEB tech), on WEB SLINGERS: A Spider-Man Adventure. Later, when walking through the esplanade towards Disneyland park, the stars took some selfies with the season 3 poster for “Love, Victor” before heading to Sleeping Beauty Castle for another group photo.

They then spent the afternoon exploring the park which included a thrilling ride aboard Big Thunder Mountain Railroad and a trip to Star Wars: Galaxy’s Edge where they met the legendary Bounty Hunter Boba Fett, before ending their day with a favorite nighttime spectacular, “Fantasmic!” All in all, it was a magical day at the Happiest Place on Earth!

All episodes of “Love, Victor” will be available on June 15th on Hulu and Disney+.