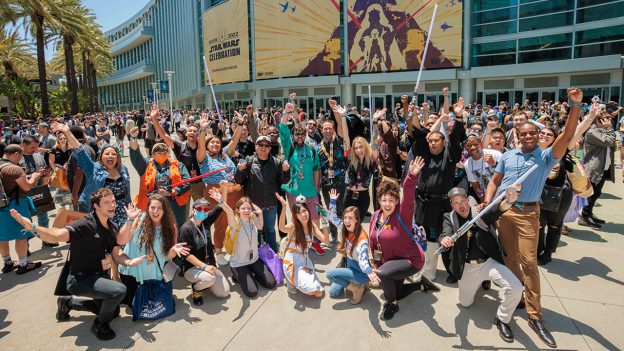 If you saw lightsabers aplenty throughout Anaheim last weekend, you weren’t imagining it: Star Wars Celebration was back, bringing fans of the stories from a galaxy far, far away together once again. Because the celebration took place across the street from the Disneyland Resort, the presence of cast members throughout the weekend was just as strong as the Force itself.

“I just feel so much love here, being both a Star Wars fan and a cast member,” said Joe, a main gate receptionist at the Disneyland Resort, who was dressed as Finn from the Star Wars sequel trilogy. “I feel so much positive energy here, and I love it so much.”

I myself am a huge fan of Star Wars, and I was excited to spend some time not only showcasing my love of the franchise, but also meeting cast members who were just as big of fans (if not more) as I am. And I did at a special cast member gathering for a photo, which included cast members from Disneyland Resort, Walt Disney World Resort and even the Disney Store in New York City, all donning a variety of Star Wars costumes and clothing.

“It’s out of this world to see not only a collection of Star Wars fans in one location, but also to experience our sister location,” said Michael, a food service host in Star Wars: Galaxy’s Edge at Disney’s Hollywood Studios.

Some cast members share the skills used to create magic for guests to showcase their passion for Star Wars, as I discovered when I met David, an electrician at the resort, who built a full-functioning astromech droid!

“I’m very mechanical, obviously: I work in facilities. I just love Star Wars, so it kind of combines the best of both worlds.”

The Disneyland Resort has a unique connection to Star Wars, one that started before anyone realized it since a young George Lucas himself was in attendance in the early days of Disneyland’s grand opening. It was here that guests first stepped into a Star Wars experience in 1987 when Star Tours debuted, where I was first introduced to the films as a young guest!

During the weekend, Disneyland Park hosted Star Wars Nite, and cast members worked hard to make sure guests attending had the best experience interacting with these powerful stories.

“I was born and raised on Star Wars,” said Christopher, an attractions host at Star Tours – The Adventures Continue. He chose to work at the Disneyland Resort to immerse guests in their own Star Wars experiences. “To see guests come to the park and experience things the way I did growing up and be a part of that story… it’s really awesome.”

Also present at Star Wars Celebration was a crew of cast from the resort who lent their operational expertise at the convention.

“This is my first time ever coming to Celebration. I’ve always wanted to come,” said Heidi, a merchandise hostess. She’s one of several cast members at a booth that provided guests with deeper knowledge about the exciting Star Wars: Galactic Starcruiser experience, where they met cast from Walt Disney World, including one of their Disney Ambassadors, Raevon!

One of the most popular exhibits of the weekend was The Mandalorian Experience, which displayed costumes, props and set pieces used in the Disney+ series “The Mandalorian” and “The Book of Boba Fett.” The exhibit was staffed by cast known for their love of Star Wars and experience working in Star Wars: Galaxy’s Edge.

“Disney has this reputation of great service and we were able to deliver that [at the exhibit],” said Dennis, an attractions host in Star Wars: Galaxy’s Edge. He noticed guests’ excitement when they saw their Disneyland Resort nametags. “It was incredible – just to hear that praise from them was even more uplifting, it was an honor.”

The connection that many cast members have with Star Wars is a powerful one, and although Star Wars Celebration Anaheim 2022 ended, fans can rest assured knowing that their favorite experiences at the Disneyland Resort are made possible by individuals who carry a deep passion for storytelling and immersive experiences.

Until the next time we can all gather with lightsabers and droids again: may the Force be with you. Always!