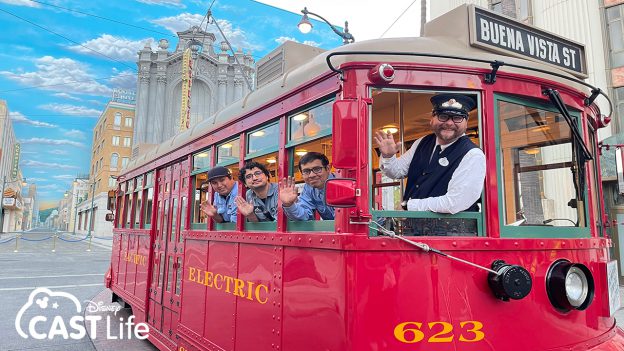 It’s been all about the bells and whistles these past few months as cast members have been working hard to add the final touches to the Red Car Trolley, which returned to Disney California Adventure park on July 17.

Modeled after the 2,700 Pacific Electric Railway trolleys that covered more than 1,000 miles of Los Angeles track from 1887 until 1961, the Red Car Trolley pays homage to the 1920s lifestyle that first greeted Walt Disney when he arrived in Southern California in 1923. Today, guests of all ages can enjoy a sense of forgotten nostalgia while riding the trolley.

“I’ve always liked to think that the Red Car Trolley is kind of the heart of Buena Vista Street and Hollywood Land,” said Attractions Lead Ryan Austerman. “I think it just really completes the entire experience of being transported back to what Los Angeles looked like when Walt arrived.” Ryan was part of the Red Car Trolley’s opening team in 2012 and now also played a part in bringing back the attraction.

Starting this summer, guests are able to enjoy views of Buena Vista Street, Carthay Circle Restaurant, Hollywood Boulevard and Sunset Boulevard while learning about the man who came to Los Angeles with an idea, and later, followed his dreams. The Red Car Trolley continues to be a unique experience for guests as it highlights Walt’s journey and allows them to step into his footsteps.

“We talk about Walt, and we talk about everything we get to experience today,” said Ryan. “It feels really good to know that I’m going to have a part in bringing this back to guests.”

The return of Red Car Trolley to Disney California Adventure park has been anything but a small feat. Teams worked together to bring the trolley back to life in preparing the attraction, training the cast and perfecting the script.

“For us working on it, it’s fun. It’s different than any of the other attractions,” said Pat Casper, one of the attraction’s machinists.

For other cast members, the Red Car Trolley’s return symbolizes a hopeful future filled with pride and joy. “When I go into the park, I’m able to show my daughter that I worked on this trolley and have her ride it for the first time,” said Electrician Andrew Ton.

Although many others have experienced the Hollywood charm of the Red Car Trolley in prior years, Ryan shared some trolley insider knowledge about hidden symbols scattered throughout the attraction. “Many people don’t know that 623 stands for 1923 when Walt first came to California. 717 stands for July 17, which is the opening day of Disneyland.”

Whether guests consider the Red Car Trolley’s return as an opportunity to enjoy a glimpse into the past or just a scenic ride through Disney California Adventure park, the attraction’s return is sure to bring a special kind of magic back to guests and cast members alike.