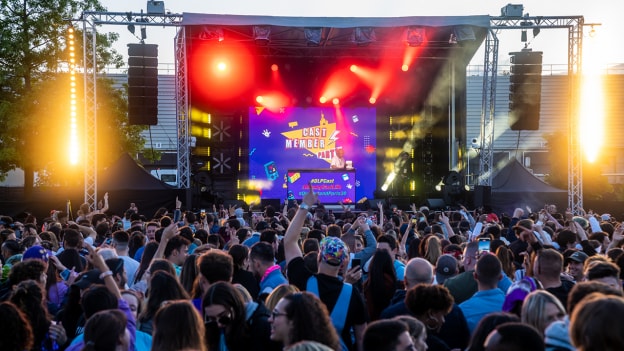 Disneyland Paris Takes Cast Members Back To the 90s!

On June 30, Disneyland Paris welcomed back its summer cast member party after a two-year hiatus. The party was themed to the 90s (since Disneyland Paris opened its gates in 1992!) and thousands of cast members gathered for an exciting night filled with unique Disney Cast Life moments.

During the night, the Ambassadors – in full vintage gear – took cast back to the 90s through Disney movie and music trivia and surprises on stage! Cast also got to recreate iconic movie posters from that period in fun filled photo locations and taste their way through a diverse range of food trucks!

“I love getting to see everyone again and we get to have super food! It’s super cool,” shared Mathilde El Allaui, merchandise cast member.

But the pièce de resistance was an hour of live performances from iconic European singers and bands from the 90s featuring Worlds Apart, Corona and Larusso.

“After two years, it was important for us that the summer cast member party returns in a big way, especially during the year of our 30th Anniversary,” said Laurence Bettini, director of total rewards.

Cast members were later treated to a surprise firework show themed to Disneyland Paris 30th Anniversary and an up tempo version of the anthem, “Un Monde qui s’Illumine”.

The night ended with an exciting dance party filled with lots of smiles and sparkles in the eyes of the cast members, ready to assemble for Disneyland Paris’ next milestones: the opening of Avengers Campus!

For more #DisneyCastLife stories, including updates on Avengers Campus, check the Cast Life Blog every day and follow the Disney Ambassador teams on Instagram.