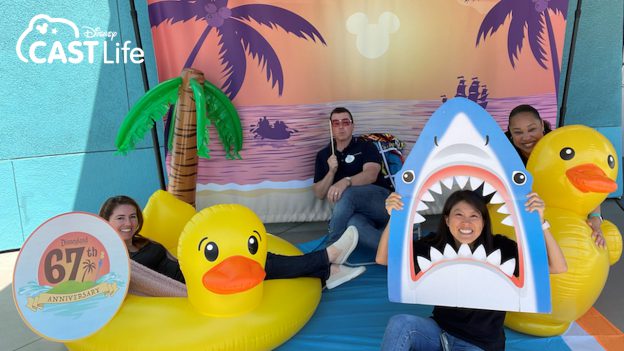 The 67th anniversary of the Disneyland Resort brought a great week of celebration and cast appreciation activities. With a week full of events, giveaways, backstage photo locations, surprises and much more, cast members were able to celebrate and participate from their happiest place on earth — whether in their home, office, backstage location or the Disneyland Resort itself. The 67-year legacy of the resort would not be possible without the amazing people who keep the magic alive… the cast members!

The magic of Disneyland Resort spans well beyond the front gates; cast members at off-property locations joined in on the celebration with activities, surprise giveaways and photo opportunities.

From offices to stables and warehouses, cast members were eager to share their love for the Disneyland Resort and live their best #DisneyCastLife. Even the four-legged friends and cast members of the Circle D stables took a little break for some celebratory horseplay!

The 67th anniversary celebration week kicked off in a super celebration fit for the real superheroes of the Disneyland Resort — our cast members! The Avengers Campus after-hours party gave cast the opportunity to walk amongst heroes, save Spider-Man from a Spider-Bot takeover on WEB SLINGERS: A Spider-Man Adventure, and rescue the Guardians of the Galaxy on Guardians of the Galaxy – Mission: BREAKOUT! By the looks of it, Avengers Campus just got some great recruits!

With the return of Finding Nemo Submarine Voyage just upstream, cast members were treated to an exclusive ridership opportunity to reembark on the underwater adventure before it sets sail to guests July 25, 2022.

Celebrating the return of a beloved activity, the annual Canoe Races, cast members put their paddles to the pond (or, in this case, river) as they raced around the Rivers of America. Cast created teams from all lines of business to practice, compete and eventually race to the finish to determine what team would be the Canoe Races champions. Friends and family of the racers lined up around the Rivers of America to cheer on their favorite teams in their quest for victory.

The fun did not stop there! The morning festivities shifted from paddles to pirates and paranormal expeditions with ridership opportunities at Pirates of the Caribbean and Haunted Mansion. Canoe Race participants and all attendees received exclusive access to a few attractions along the Rivers of America before the park opened.

On a usual day at the Disneyland Resort, guests sail around the world in “it’s a small world,” but once a year cast members flock to the water and watch as their decorated ducks race around the world in the annual Duck Races. The possibilities are endless when it comes to decorating these ducks, and the creativity cast members have shown throughout the years is what makes the Duck Races a fan favorite. On Friday morning, cast arrived ready, ducks in hand, to see which ducks would make it to the top. The creativity was highlighted by awarding the best-decorated duck in numerous categories: “Favorite Attraction,” “Your Role in the Show,” “Most Creative” and many more!

After racing rubber ducks around the world, cast members continued the fun into Fantasyland. The fun-filled morning was nothing short of a fantasy, as cast visited some of the most beloved Disneyland Resort opening day attractions.

It would not be a Disneyland Resort anniversary without the annual WelcomeEARS tradition. Early Sunday morning, as the gates of Disneyland park opened to celebrate 67 years of magic and memories, cast members stood along Main Street, U.S.A., to welcome guests to the Happiest Place on Earth. As our cast lined the street, Mickey Mouse gloves in hand, guests were greeted in true Disney fashion.

After 67 years, the Disneyland Resort continues to create dreams and inspire people on a daily basis, and it is all thanks to the cast members who help make the magic happen every day.