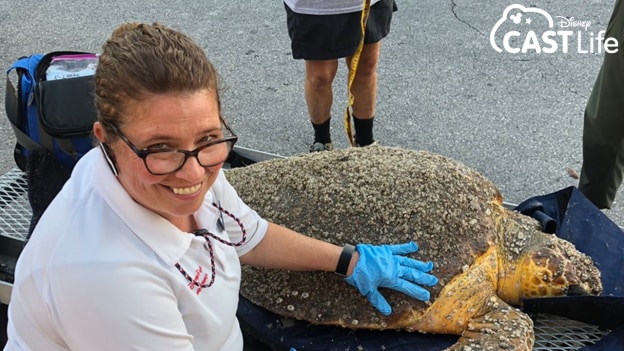 See the line where the sky meets the sea? It calls me … to share more about Barbie Martz – an incredible cast member at Disney’s Vero Beach Resort!

As a naturalist at Disney’s Vero Beach Resort, a Disney Vacation Club Resort, Barbie has the unique role of educating guests about the area’s plant and animal life. Through wildlife kayak excursions, nature treks to seek out animal tracks and more, Barbie helps guests discover the ecological wonders that surround the resort.

Over the years, she’s made incredible memories in her naturalist role, and Tour de Turtles stands out as one of her favorites. Tour de Turtles is an annual event created by The Sea Turtle Conservancy conservation organization that follows the migration of sea turtles. By fitting satellite transmitter devices on turtles after they have nested on the beach, scientists are able to track turtles’ movements through the ocean, collect data about their habitats and identify patterns that could hold the key to their survival. Disney has collaborated with The Sea Turtle Conservancy for 15 years to study sea turtles and host this annual event at Disney’s Vero Beach Resort.

This year’s Tour de Turtles event takes place today, July 30, and Disney is sponsoring sea turtles Neytiri and Ronal, both names inspired by the upcoming premiere of the film “Avatar: The Way of Water,” in theaters December 16, 2022.

Barbie said seeing the turtles go out into the ocean is something you never forget. “Our guests come from all over to see the turtles and learn about them,” Barbie said. “It really is something special, and I’m proud to be a part of it!”

Barbie’s love of the beach and for Florida wildlife began when she visited from her home state of Tennessee. “I turned 19, and the ocean was calling me,” Barbie said. “I came down to visit my family, and I knew Vero Beach was for me.”

Barbie has worked at Disney’s Vero Beach Resort for over 20 years and has been the resort’s naturalist for more than 10 of those years. She started her career as a culinary cast member, but when she heard about the naturalist role, she was hooked. “I met with the naturalist at the resort, and I just had to know everything about the role,” she said. “I’m so passionate about sea life, so I knew this was the job for me. That’s one of the best parts of working for Disney – the possibilities are endless, and there’s so much you can do!”

Barbie’s favorite part of her role is creating special memories with guests and seeing their faces light up when they learn something new. “Having the chance to do what I love and teach guests about the wildlife around us is so special,” she said. “Not only are guests having a great vacation, but they’re learning something about our amazing wildlife!”

So, if you’re ever vacationing at Disney’s Vero Beach Resort, make sure to say hi to Barbie! You might learn something new (and maybe see a sea turtle or two!).