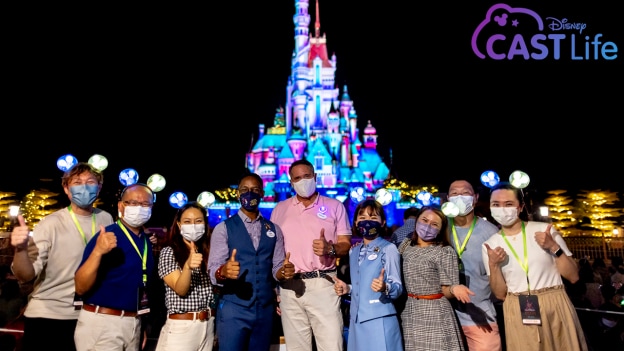 We met everyone at the front of the park and walked through Main Street, U.S.A. together, reminiscing on the good times and just how fun the Ambassador journey was during each of their terms! We always say, “once a Disney Ambassador, always a Disney Ambassador.”

We have been so inspired to be in the presence of young leaders who led in this role before us, so as a surprise to our Alumni they were presented with a one-of-a-kind gift. For the first time in the history of the program, Ambassador Alumni will now be honored for their contributions with a special nametag they can wear for the rest of their Disney career.

The nametag is specifically designed with Ambassador pin colors in mind. Additional inspiration for the shape of the nametag and coloring was taken from Walt Disney’s Disneyland employee badge #1, worn briefly during Disneyland’s opening day rehearsal in 1955 and seen on television in The Disneyland Tenth Anniversary Show in 1965. It was a beautiful moment to see everyone’s faces light up as they pinned on their new nametags.

After the surprise, we led everyone to the castle and took photos with our Ambassador Alumni wearing their new nametags! There was so much laughter and joy as we all came up with fun concepts and catchphrases for our pictures and short videos! We all felt a sense of belonging, kinship and appreciation for each other and our journeys!

Later that evening, we met all our Ambassador Alumni family again in front of our Castle of Magical Dreams. This time, dressed up in glowing Mickey Ears while watching our new favorite show “Momentous” together. What a lovely way to end what will forever be one of the most memorable days for us yet!